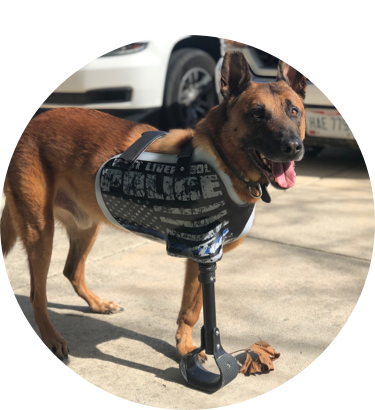 Derrick Campana is one of some ten to twenty people in the world who can make custom prosthetics for animals of all shapes and sizes, but his ability to do the work started with one black Labrador Retriever named, “Charles.”

A malformation in his leg put Charles in need of an artificial limb. In 2004, Charles’ owner, a veterinarian, took him to see Campana, a prosthetist for humans, and that’s when Campana discovered his true passion – making the devices for animals. That one Labrador Retriever (whom you can see in the video below) inspired a business – Animal Ortho Care – which today has some 20,000 patients with mobility devices, 80 percent of whom Campana never sees. Owners send in molds through the mail using Campana’s casting kit,  and Campagna sends a prosthetic back. In some cases, patients come to Campana, but some owners fly Campana to where they live.

Campana has pioneered the field of Veterinary Orthotics and Prosthetics into what it is today, and to that end, he started a second business called Bionic Pets when Animal Ortho Care exploded in growth. In this way, he’s able to split his craft into two separate disciplines, Prosthetics (Bionic Pets) and Orthotics (Animal Ortho Care).  In fact, AOC is the only animal bracing and supports company in the country to offer custom and semi-customizable animal braces. Service dogs, pets suffering from  Intervertebral Disc Disease and even police dogs have all benefitted from Campana’s talent, but not only that, AOC works with nonprofits and animal sanctuaries including the Woodstock Farm Sanctuary, Goats of Anarchy, Living with Elephants Foundation and the Animal Hope and Wellness Foundation.

It strikes us that Campana hasn’t just found a business, but a calling, and our dogs are the better for it, from Boston Terriers to Weimaraners to Golden Retrievers.  After reading the different success stories, we leave with four words: Bless you, Derrick Campana.