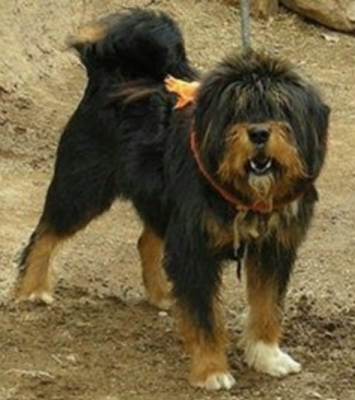 Seventy years ago, experts believed the Tibetan KyiApso to be a variation of the Tibetan Mastiff*, and while it’s hard to see how they came to this conclusion,  it’s possible these people didn’t see enough of either to discern the differences that seem obvious to us today.

An adult KyiApso rarely exceeds 90 pounds, the low end of what a Tibetan Mastiff can weigh (an adult male can reach 150 pounds, perhaps these experts thought they were looking at slight TMs?)  The KyiApso breed was also far more uniform in appearance than was the TM back then because it came from one region in Tibet alone, the Mt. Kailish region of the Tibetan Plateau, and this kept the breed’s phenotype consistent. Tibetan Mastiffs had a far wider distribution, and thus, there was more variation within the breed.

There are other visible differences. A KyiApso’s tail must have at least one complete curl, while a TM doesn’t require a full curl in its tail, and in fact, a double curl on a TM is a fault. Also, a KyiApso’s ears are longer than the ears of a Tibetan Mastiff.  Under its thick coat, a KyiApso is long legged with a light bone structure whereas the TM is strongly boned.

Further, the KyiApso has distinctive rolling yet vertical topline gait, a trot with a marked bounce which hints at the breed’s exceptional speed and agility in an open run unmatched by most other dog breeds. The KyiApso must be sure footed and balanced (think of where it’s from!) and a dog that shows awkwardness of movement or lack of sure footedness is a disqualification.  Possibly the only thing that the early experts did got right was that the KyiApso is an ancient bearded molosser.

And finally, because in the Tibetan language, “Kyi” means dog and “Apso” means bearded or hairy, the Tibetan KyiApso is also called the Tibetan Bearded Dog.

There was a Tibetan KyiApso Registry Information site which has been discontinued, but contact information for some of the former officers of the club are hyperlinked.