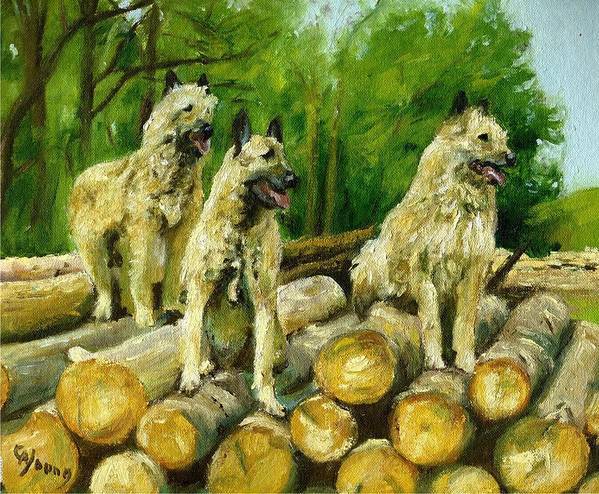 As opposed to the long straight coat of the Belgian Sheepdog and Tervuren, or the short coat of the Malinois, the Laekenois’ disheveled, just-got-out-of-bed appearance endears it to anyone with a weakness for Teddy Bears (though this shaggy look shouldn’t fool anyone into thinking the Laekenois isn’t a serious working dog, it most certainly is).

As tousled and unkempt as this coat appears, there are standards for it in the breed standard. Texture “must be rough and coarse,” and it should be severely penalized if it is silky, soft, or lacking a double coat. A beard must be present, but head coat should not be so long as to “hide the eyes nor the lines of the head and skull and make the head appear square or heavy.” The coat length, too, is specified: Hair should be approximately 2 1⁄2 inches over the body.  It wasn’t, however, until 2001 that the standard changed and included for the first time the length of the Laekenois coat.

Though some may choose to strip the Laekenois coat, it’s not necessary as long as regular weekly brushing is done with a long pin Pin Brush. The coat will still show some coarseness, but the dead coat will often extend beyond the base coat if the coat is left completely unstripped. These hairs can be pulled by hand and discarded. A marvelous series of photos on this can be seen here.

Things get interesting when we get to color, and this is true of all the Belgian Sheepdogs.

In the Laekenois, all shades of red or fawn to grayish tones are acceptable. Traces of black on the muzzle and tail are also acceptable, and the degree of black varies from dog to dog with all variations being equally acceptable. The first standard of the Laekenois, however, only admitted the dark gray color known as dark gray ash.  One source writes that the decision to choose dark gray for the Laekenois was influenced by breeders of the day who preferred the color, particularly Omer Reumon from Rixensart. Not everyone shared his enthusiasm for the color, and one visitor to his kennel later wrote that most of Reumon’s red dogs were “very good specimens, the ash-grey ones had a lot of difficulty to reproduce.”

Much later, researchers found that the actual length and type of coat alters the expression of color.

Burnez and Burnez (1972),  Burnez et al (1972), and Robinson (1987) provided data that found that in the Tervuren, the sable color is dominant, and that in the Belgian Sheepdog (Groenedael), black is dominant to sable. In Malcolm B. Willis’ Genetics of the Dog, he cited that A. Hirschfeld (1933) produced ten black-and-tans from a Groenedael/black-and-tan Doberman. This was thought to imply a recessive black,  but R. Robinson held the view in Inheritance of Colour and Coat in the Belgian Shepherd Dog that some ‘recessive’ black Belgian Shepherds were actually black-and-tans, that the ‘grey’ Tervueren was caused by the cch (c superscript ch) allele though he describes it simply as ch, and that it was likely that Laekenois/Malinois colors were identical in genetic terms to those of the Tervueren, but altered in their expression by different coat types.

Image: Belgian Laekenois by Olde Time Mercantile is available for purchase as fine art, and in home decor and lifestyle items here

2 thoughts on “The Coat Difference”