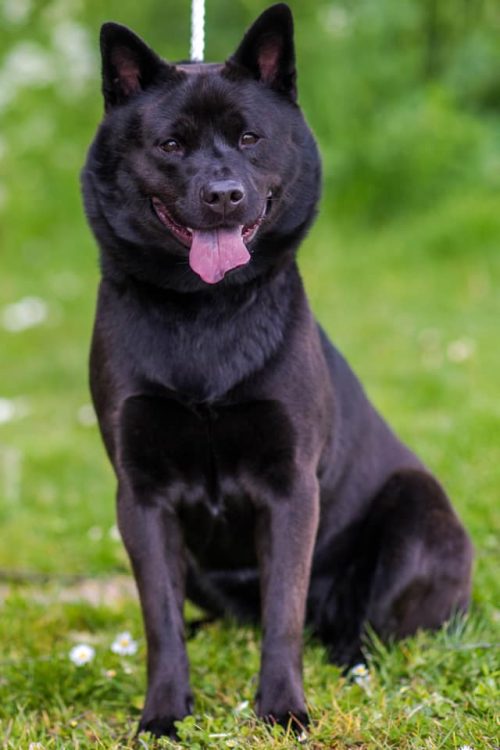 The Kai Ken, a fascinating breed to begin with, is genetically interesting as well when it comes to color.  Namely, it’s impossible to breed for color. With one exception, the Kai Ken only comes in brindle (the dominant gene). The Kai is often referred to as the Tora Ken, or “tiger dog” by those who liken it to a tiger.
Kai brindles are genetically identical from what we can see, colors defined by the density of the black striping which again, is called brindle. The lighter colors (brown, gold, reds) are base coat colors which are masked by all of the black stripes. Kai Ken that look almost completely black have so many stripes that it looks like the color is just peeping through. Genetically, brindle is dominant at K to non-brindle, but recessive to dominant black at K.  Two black brindle parents can produce a litter of all colors, and interestingly, while some sources write that newborn Kai Ken pups do not have the stripes, they are actually born with all of the stripes that they will ever have. As they grow, the stripes get farther apart which allow color to peek through, and with age, hormones, nutritions, etc., the intensity of the coat will change. Pups can change patterns multiple times until the pup is around five years old.

As for the exception we touched upon earlier, it is the recessive cream/red/ee gene which is non-standard and not recognized, but does occurs naturally.  As the cream gene is recessive, most breeders who DNA test are able to easily avoid it.

A sparsely brindled dog is referred to a “Aka tora” which literally translates to ‘red tiger.’ In this rarer color, the red/brown coat is very visible beneath the black. Breeding for this color typically ends up producing dogs with poor coats which is why breeding Akatora to Akatora is frowned upon since it produces less quality in the coat and the brindle. It’s very rare to produce a true Akatora.

“Chu tora” translates to “middle tiger” or “medium tiger,” and this describes an evenly brindled dog where there is equal amounts of brindle/black and undercolor. Two Chutora parents could produce all black pups!

“Kuro tora” means “black tiger,”and here we have a densely brindled dog. Some Kurotora will look completely black because of the density of the brindle and hard-to-see base color.

The  distinct brindle pattern was likely an asset to a breed historically used to hunt the Japanese Serow, as well as deer and boar in the mountainous regions of Japan. In this country, the first Kai dogs in the US were given to a zoo in Utah in the 1960s but were never bred. It wasn’t until the 1990s that a few Kai Ken were brought from Japan to be the foundation stock for the breed in the US, while in Japan,  the Kai Ken was officially designated a “Natural Monument.”

Image: Photo of Ronin Akiko ‘Akiko,’  a kuro-tora Kai Ken. Again, her coat is dense brindle and is genetically the same as any other brindle, it’s just defined by the density. This girl came from a red brindle sire and medium brindle dam, and ended up being the darkest in the litter. Photo taken by owner, Astor Williams, whom we’d also like to thank for the color coaching!