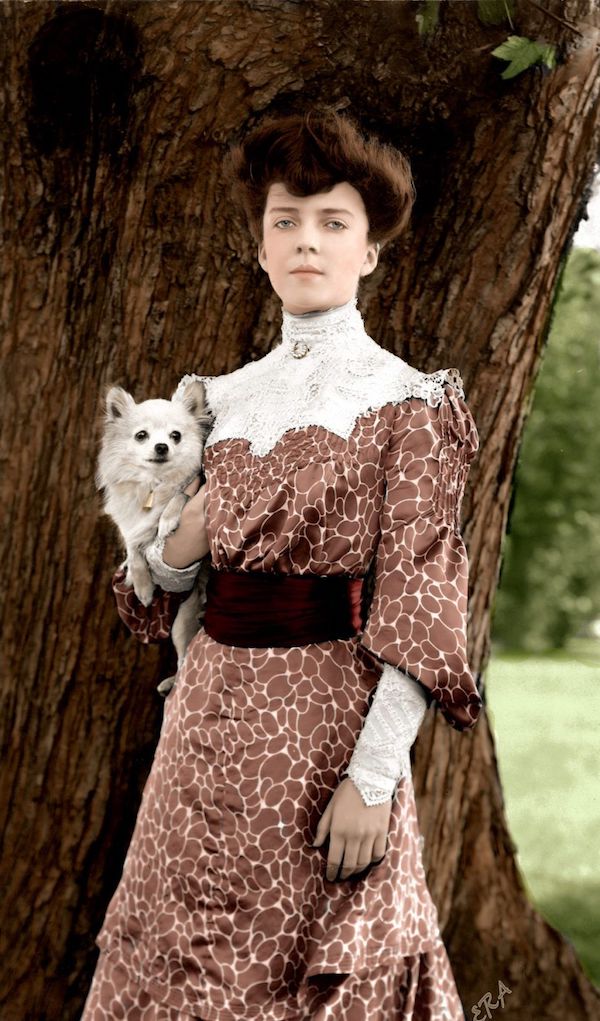 The eldest child of U.S. President Theodore Roosevelt (and the only child he had with his first wife, Alice Hathaway Lee), was a problem.

When Alice was 15 years old and her father was the governor of New York, she was such a handful that her dad and stepmom threatened to send her to a very conservative, discipline-oriented school in New York City. Alice wrote a note to her parents that read, “If you send me I will humiliate you. I will do something that will shame you. I tell you I will.”

Her parents backed down.

Alice smoked cigarettes in public. She wore pants. She chewed gum. She placed bets with bookies, stayed out late partying, and – gasp – rode in cars with men.  Of the smoking, her father declared that “there will be no smoking under my roof,” so the teenage Alice climbed out a window and onto the roof of the White House where she could smoke without technically breaking her father’s rule.

Alice kept a pet garter snake named Emily Spinach “because it was as green as spinach and as thin as my Aunt Emily.” Less amusing to those around her is that Alice often had Emily Spinach wrapped around one arm at the parties she attended.

A friend of Alice’s stepmom described Alice as “like a young wild animal that had been put into good clothes.” Her father famously said of her “I can either run the country or I can attend to Alice, but I cannot possibly do both.”

We think we would have liked Alice a lot. The public certainly did. Alice’s antics kept her in the headlines, and at one point, she got so much fan mail at the White House that the Roosevelts had to hire an additional secretary just for Alice’s mail. Babies were named after her, songs were written for Alice,  and her favorite color — a shade of blue-grey — became widely popular as “Alice blue.”

Sadly, Alice started out with loss. At just two days old, her mother (also named Alice) and grandmother died eleven hours apart, Alice (senior) of kidney failure, and her grandmother of typhoid fever. To Alice’s bereaved father, she was just “Baby Lee” as he couldn’t bear to call her by her name. In her later years, she had two mastectomies, the second in 1970.

That said, Alice shared with her father a love of animals, and two of Alice’s that were more acceptable than Emily Spinach were “Leo,” a long coated Chihuahua, and “Manchu,” a small black Pekingese that Alice received in 1905 from the last empress of China, Empress Dowager Cixi, during a trip to the Far East. In her autobiography, Alice described meeting the Dowager Empress for the first time, and their subsequent conversation in the gardens of the palace. The next morning, Alice was presented with Manchu as a gift, and by all accounts, Manchu took to Alice right away. For her part, Alice seems to have rubbed off on Manchu. She claimed that she once saw Manchu dancing on his hind legs in the moonlight on the lawn of the White House.

Marriage didn’t settle Alice down. When she married congressman Nicholas Longworth III, she made headlines by cutting the wedding cake with a sword. The marriage was marred by infidelities on both sides, the apex being Alice’s open affair with Senator William Borah whose child she bore. She actually considered naming their daughter “Deborah,” aka “De Borah.”

We thought you’d want to know what dog breeds this “wild child” chose for herself. You can read more about Alice Lee Roosevelt Longworth on many sites, but this one offers a few photographs to accompany her biography.