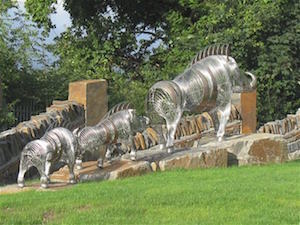 Who doesn’t love a good dog legend?  A good one is about “Cavall” (also known as Cabal),  the favorite dog of King Arthur before he became king. While “Cavall” always had the honor of being the last dog to be let loose during a stag hunt, his fame came from hunting the supernatural great boar, Twrch Tryth. According to the legend, Cavall left his footprint in a stone in the course of a hunt for the boar, and afterwards, Arthur collected a heap of the stones beneath the one on which was footprint was left. It was called the Carn Cabal, and though people stole the stone to have for themselves, the stone always returned to its original place, no matter how far away it was taken.

Arthur’s killing of a wild boar is marked by a statue in Ammanford, Wales, but what kind of dog was Cavall?  We’ll never really know, but Arthurian scholars strongly speculate that he was a Mollosus, a war dog from Southern Europe who traveled with the Roman legions. Molossus descendants are with us still in breeds like the Rottweiler, Great Dane, the mountain dog breeds, English Mastiff, St. Bernard, and Great Pyrenees.  If you have any of those breeds, who knows, maybe your dog has a bit of Cavall in him or her!