No one minds a good ribbing now and then, but in our dogs, “ribbing” is vitally important because it’s where vital organs reside, organs like the heart and ribs that impact a dog’s stamina and performance.  In terms of “spring” or “flatness,” ribs vary with different breeds, but what’s common to all dogs is that they have thirteen ribs on each side: The first nine are referred to as  “true ribs” because they’re attached to the sternum; the next three are called “false ribs” because they’re hinged at the bottom of the ninth rib and not connected to the sternum, and the shortest rib, the thirteenth rib, is called the “floating rib,” because it’s not connected to the sternum below.

When a breeder, show judge, or a student of canines “goes over” a dog and gets to the rib cage, they’re feeling the ribs to determine curvature or flatness.

In the broadest terms using shapes as a visual aid, think of a “well sprung” chest as the shape of an elliptical, a “barrel chest” as a circle, and a flat, or slab-chested dog as a stretched out oval.

Slab-sidedness is undesirable in most earth dogs like the Jack Russell Terrier because the increased distance from the point of the dog’s withers to the sternum makes it hard for the dog to maneuver in a tunnel, and that restricts his ability to get at prey. 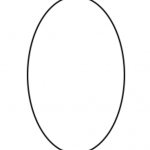 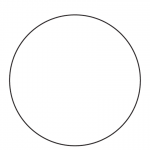 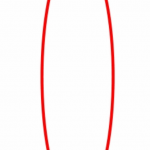 The Bulldog standard, for example, calls for “well-rounded ribs”…and a “body [that] should be well ribbed up behind,” while the Chesapeake Bay Retriever standard indicates a “rib cage barrel round and deep.” The Scottish Terrier standard stipulates that “ribs should be well sprung out from the spine,” but the Pembroke Welsh Corgi’s ribcage is slightly “egg shaped,” and the Bedlington Terrier should be “flat-ribbed and deep through the brisket.” The Sloughi also calls for flat ribs  (“The ribs are flat, long, and slightly curved in the posterior third of the chest).

When feeling a dog’s ribs, it’s important to know what’s appropriate for that breed. Flat ribs in a Pemmie, barrel ribs in a Bedlington, and well sprung ribs in a Sloughi not only impacts how the dog looks, but how it performs.