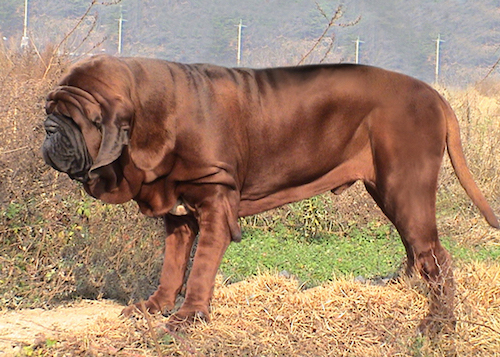 It’s a dog that warrants a double take.

If it isn’t his loose and heavily wrinkled body, it’s the enormity of his size.  Tipping the scales at upwards of 185 pounds, the Korean Mastiff is considered to be the heaviest Korean dog breed.  Intimidating doesn’t begin to describe the breed’s looks, but by all accounts, this is truly a gentle and sweet-natured dog.

You might, however, never lay eyes on one in your life as it’s one of the world’s rarest breeds.

Popularly known as Mee Kyun Dosa and Dosa Inu in its country of origin, the Korean Mastiff is a distant cousin of the Tosa Inu which is believed to be part of its ancestry. Enthusiasts believe that when the breed was developed 200 years ago, the Neapolitan Mastiff, Bloodhound, and the Dogue de Bordeaux were also introduced to the gene pool, and later, the Saint Bernard and English Mastiff may also have been brought in, but none has been proven scientifically.

The breed has popularity as a show and companion dog, but it was developed to be a watchdog.

While the dog world is aware that a Tibetan Mastiff sold for $2 million back in 2014, the most expensive dog ever imported into India was a Korean Mastiff.  Satish S from Bengaluru, President of Indian Dog Breeders Association made headlines for importing what was billed as the the most expensive dog to ever enter the Indian Territory. It is said that Satish paid 10 million Indian Rupees for the dog, or about $140,000 USD.

A Clown in the Cloak of a Philosopher
... See MoreSee Less

A Clown in the Cloak of a Philosopher

“A Clown in the Cloak of a Philosopher.” Behind the serious expression of a French Bulldog is a canine comedian. She can do something utterly comical all the while wearing that furrowed-brow-deep-...