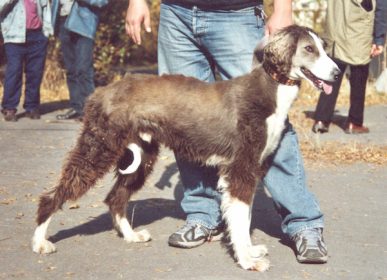 According to legend, a puppy that hatched out of a single egg stolen from the nest of a Kumai mountain vulture grew up to become a Taigan, the dog that saved an entire tribe from starvation by dispatching a pack of wolves attacking their herd of cattle.

Who doesn’t love a good legend?

And while a puppy-producing egg is far-fetched, the reverence with which the Kyrgyz people regard the sighthound of their rugged homeland of Kyrgyzstan is not. The dog was so treasured that traditionally, good working dogs weren’t sold, and the only way to get a Taigan was to be given one as a gift, or steal it. Kyrgyz folklore, rock paintings, oral anecdotes and embroidered handiwork by Kyrgyz women prove this to have been the case for thousands of years.

For centuries, Taigans – also known as Kyrgyz Sighthounds –  were indispensable helpmates to their people. These wicked fast dogs hunted for their own food, and helped their nomadic masters hunt for their food, as well. Modernization, however, was not good to the breed. Industrial development, modern firearms, and the arrival of new people diminished the need for a swift hunting dog. Worse, the ancient tradition of keeping Taigans loose and untethered resulted in many dogs being shot on sight in accordance with an ordinance intended to solve a stray dog problem. The Kyrgyz sighthound began disappearing as a breed.

In the 1930s, some breed enthusiasts tried to save the Taigan, and registration of existing dogs was started by Soviet cynologists.  The German invasion of 1941 put a stop to such efforts.  Interestingly, the seeds of a breed standard for the breed could be found in the same Soviet Union mandate that lead to the creation of the Estonian Hound. In 1964, Professor S.A. Miniukhin wrote the first Taigan breed standard which was then accepted by the Kennel Council of the Soviet Union. When Kyrgyzstan became an independent country in 1991, however, centralized research of the breed ended. Collective farming collapsed, and those living in rural areas had to rely on hunting with the Taigan once again to earn a living. Conversely, a new upper class adopted the breed as a status symbol and evidence of national pride.

Despite reports of the breed being in a catastrophic situation with less than a handful of Taigans left, it’s difficult to know with certainty how many dogs there actually are. The purest dogs are said to be found in remote areas, and mountainous country is difficult for experts or researchers to navigate. Add to this the Kyrgyz tradition that a good dog should never be shown to strangers, and being able to see a dog becomes difficult. It requires the support of the village’s male elder, as well as the respect of local hunters who would act as intermediaries by asking the owner for permission to see his dog.

With all that said, our homework suggests that the breed is in demand and remains popular in its home country. Yearly festivals seem to attract the best Taigans who are shown off in competitions for speed and catching.  The Taigan is not yet recognized by the FCI, but is recognized by a number of kennel clubs including the German Kennel Club. A informative paper on the breed written by Tatiana Dubinina can be read here.

2 thoughts on “Kyrgyzstan’s Sighthound, the Taigan”