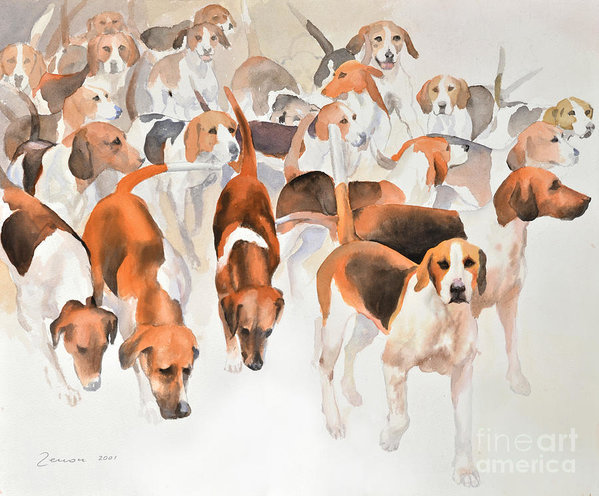 We find the English Foxhound’s breed standard to be remarkable.

It calls for front and rear symmetry. It calls for a full size, but not a heavy head. While color isn’t regarded as very important, it should be a good “hound color.” Meanwhile, the legs should be straight as a post, and as strong. We especially like this bit about the legs: “The desire for straightness had a tendency to produce knuckling-over, which at one time was countenanced, but in recent years this defect has been eradicated by careful breeding and intelligent adjudication, and one sees very little of this trouble in the best modern Foxhounds.”

Why do we like this standard? Because it refers to a trait that was eradicated in “recent years,” and mentions the “modern” Foxhound, and makes it easy to forget that this breed standard was written in 1935 and has remained unchanged ever since. That’s 83 years of resisting the temptation to fix what wasn’t broken. Over eight decades of striving to produce dogs that meet a standard, instead of changing the standard to fit what’s being bred. As Andrea Bradford, MD once wrote in an article many moons ago, the standard was “written by dog people for dog people.” It includes a point scale that assigns value to different aspects of the breed, and as befitting a dog reliant on its “running gear,” places the highest point value to legs and feet.

In 1935, the average cost of new house was $3,450.00. Gas was 10 cents a gallon, and Sir Malcolm Campbell broke the land speed world record by hitting 300 mph (as far as we know, it’s currently 763.035 mph). The point is that while things change, change for its own sake can be silly. The Foxhound was built to hunt, and wisely, Foxhound breeders have never forgotten it.

Image:English Foxhounds by Zenon Nowacki is available as a print, phone case, and poster here.