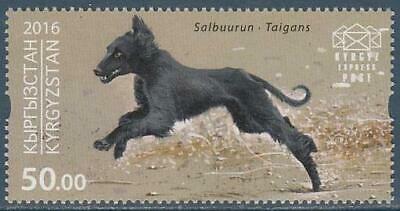 In the Tien-Shan mountains along the Russian/Chinese border is an endurance sighthound known by several names, including the Kirghiz Greyhound, the Kirghiz Borzoi, the Kyrgyzdyn Taighany, and the Kirgiskaya Borzaya.  English speakers know the breed better as the Taigan, one of Russia’s oldest sighthounds. You can read more about the background of the Taigan here, but in this post, we want to address the breed’s appearance.

Traditional expectations of the breed were to help Kirghiz hunters hunt small animals such as the hare, marmot and fox, and more formidable animals such as wildcat and wolf – often in conjunction with a trained falcon, or, in the case of the berkutch, hunters using a golden eagle. Given that the hunting grounds were upwards of 10,000 feet above sea level, it is hardly surprising that the Taigan has a long, thick double coat in a wide range of colors including black, white, grey, yellow, and brown, often with white marks intermixed. The tail, which hangs like a sabre, has a spiral tip called a “ring.” It is a distinguishing featured of the Taigan, and because the base vertebras of the ring are jointed,  it cannot be unrolled. The tail is heavily feathered, as are the ears which feature long hair called the “bourki.”  One presumes that the heavily coated paws sometimes referred to as “shoes” act as snow shoes by distributing the weight of the dog over deep snow providing “floatation,” and keeping the dog from sinking into the snow.

Sadly, purebred Taigans are on the verge of extinction. In modern times, the breed has been indiscriminately crossed with local dogs and estimates of the current number of purebred dogs  are only in the hundreds. Nationally, the breed is recognized by the Hunting Commission of the Kyrgyz Ministry of Environmental Protection, and by a number of national FCI member clubs in Russia, Ukraine, Belarus, Kazakhstan, Uzbekistan, Estonia, Latvia, Lithuania, Hungary, Poland and Germany, and we occasionally come across rumblings of an effort to save the breed.

An article by Jutta Rübesam that includes many wonderful photographs taken by the author can be read here.