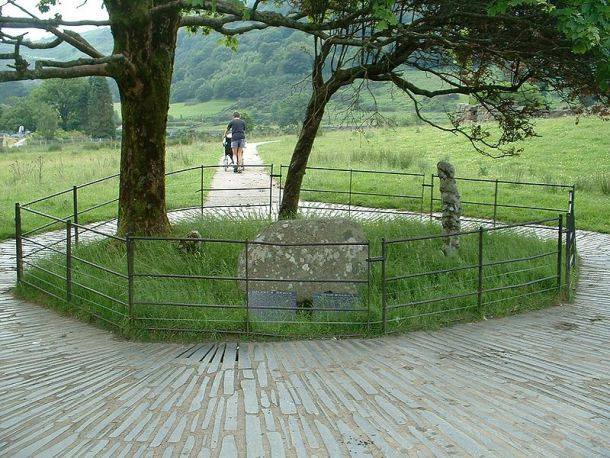 One of the most famous Irish Wolfhound legends is beyond sad, but was it true?

At the left is the marker for the final resting place for “Gelert,” the faithful Irish Wolfhound of Welsh Prince, Llewelyn the Great. His story, as written on the tombstone (seen further below) reads:

“In the 13th century Llewelyn, prince of North Wales, had a palace at Beddgelert. One day he went hunting without Gelert, ‘The Faithful Hound’, who was unaccountably absent.

On Llewelyn’s return the truant, stained and smeared with blood, joyfully sprang to meet his master. The prince alarmed hastened to find his son, and saw the infant’s cot empty, the bedclothes and floor covered with blood.

The frantic father plunged his sword into the hound’s side, thinking it had killed his heir. The dog’s dying yell was answered by a child’s cry.

Llewelyn searched and discovered his boy unharmed, but nearby lay the body of a mighty wolf which Gelert had slain. The prince filled with remorse is said never to have smiled again. He buried Gelert here.” 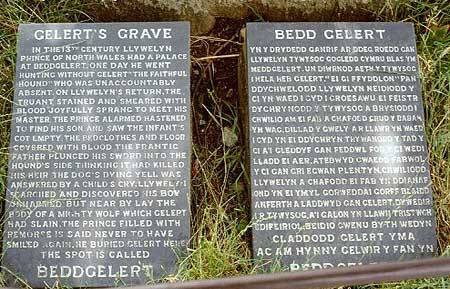 Llywelyn was struck with remorse (damn right!), carried the body of his faithful dog beyond the castle and buried him where everyone could see the final resting place of this brave dog and know the truth of his brave fight with the wolf. To this day, a cairn of stones marks the place, and the Welsh name, “Beddgelert” means ‘The grave of Gelert‘. The grave attracts thousands of visitors annually.

It’s rumored, however, that the stones are actually less than 200 years old, and that in 1793, an enterprising landlord named David Pritchard knew the story of the brave dog and adapted it to fit the village (thereby benefitting his trade at his inn). He apparently invented the name “Gelert,” and introduced the name Llywelyn into the story to validate it. In the end, we don’t know if the story is folk tale, legend or history, but because it rings true of the breed, we like to think it’s valid.