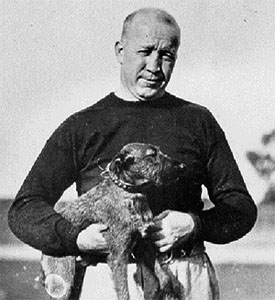 Before Notre Dame became known as the “Fighting Irish” in the 1920s, they were known as the Catholics, the Hoosiers, the Rockmen and the Bulldogs. In the 1960s, during a football game, a human joined the cheerleading squad as a “leprechaun.” The idea stuck, the school remained with the “Fighting Irish” moniker, and in 1965, named the Leprechaun as its official mascot.

It wasn’t always so, however. At one time, Notre Dame athletes were also known as “the terriers,” and for years, a series of Irish Terriers represented the University.  It’s said that Knute Rockne, himself, chose the Irish Terrier as a mascot, and the first dog named “Brick Top Shuan-Rhu” was donated by Charles Otis of Cleveland.  After that dog, several other terriers acted as the school mascot, each dog typically taking the name, ” Clashmore Mike.”  The last “Clashmore Mike” appeared on the cover of the 1963 Notre Dame Football Dope Book with coach Hugh Devore and captain Bob Lehmann.

As for why Rockne chose an Irish Terrier, we may never know. The pet he had, “Noxie,” was a German Shepherd Dog, but some have speculated that perhaps Rockne thought that the Irish “No Fear” Terrier had qualities in common with the University of Notre Dame. What we do find interesting is that the Leprechaun should have taken the place of the Irish Terrier because legend says it was The Little People (leprechauns) who gave Irish Terriers to children to be their playmates, their size and energy level making them ideal companions for other little people.

Image of Knute Rockne with one of the Irish Terriers, Tipperary Terrence II found on Pinterest and credited upon receipt of information