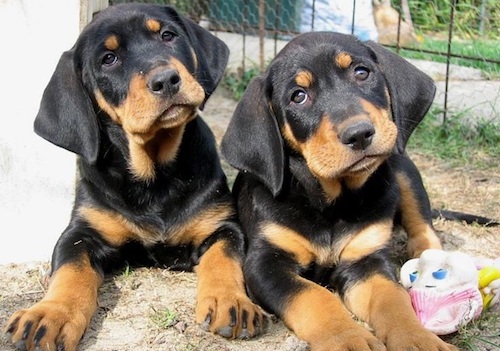 Over 1,000 years ago, Hungarian tribes that invaded the Carpathian Basin brought with them a dog cynologists refer to as the Pannonian Hound. Bred with local dogs, resulting puppies were the 11th century ancestors of the Erdélyi Kopó – the Transylvania Hound.

These hounds would become favorite hunting companions to royals and aristocracy, and because of geographical influences, hunters had their choice of a long legged and a short legged variety. Long legged hounds were used to hunt big game such as buffalo, bears, and boars in the mountains, while shorter legged hounds were kept on the Great Plains to pursue fox and hare.

War is hell, however, and it was no less so for the breed. After WWI,  forested areas began to shrink, and the draining of marshes pushed hunting with hounds back into the mountains of Transylvania. WWII and the Treaty of Trianon annexed much of Hungary’s land to neighboring countries, and in 1947, a Romanian statute that prohibited gun-ownership effectively banned most hunting while declaring the breed dangerous to game. One source we found indicated that because the dogs were perceived to be a Hungarian symbol, an effort was made to exterminate their breed altogether, a fact confirmed in a 2014 Dog News article by Agnes Buchwald. In it, she wrote that the breed was essentially sentenced to death, and (our words),  a mass extermination effort commenced to wipe the breed off the face of the earth.

Between 1943 and 1969, no new litter was registered at all.  Indeed, the Federation Cynologique Internationale (FCI) believed the breed to be completely extinct.

When Tamás Fodor and Miklós Farkasházy, organizers of the 1971 World Hunting Expo in Budapest, wanted to show off Hungarian hunting dogs, veterinarian, Dr. Lajos Györffy, and Tamás Fodor came to realize that there was no Transylvanian Hound in Hungary at all.

Through a Transylvanian contact in Máramarossziget/Sighetu Marmației, they became aware of some purebred Transylvanian Hounds who had survived and indeed, there was a litter on the ground. With an eye to buy two puppies and return them to Hungary, Györffy and Fodor traveled to Transylvania, and did indeed secretly acquire the puppies, a brother and sister. However, they lacked official papers which became a problem at the border.  In an interview with Györffy in 2001 on his 75th birthday, he recalled the moment:

“A strict border guard came in and asked if there was any personal luggage? There. We? Two puppies.

Blood ran out of his head. And permission from the Treasury? It is not. And why not? Because I don’t need this shipment, I said desperately, obeying a reckless idea. And why not? “Because it’s a special shipment… I pulled myself closer and said,” You know, your boss is also a hunter and ours. ” They often hunt together. And Comrade Ceausescu is now sending two puppies to Comrade Kádar … If you think I can’t carry it any further, please give me a certificate.

I can tell you, it’s a frozen silence. The guard was thunderstruck.

Then he suddenly said, “Don’t move, I’m talking to the boss …

I pulled myself closer and said,” You know, your boss is also a hunter and ours. ” They often hunt together. And Comrade Ceausescu is now sending two puppies to Comrade Kádar … If you think I can’t carry it any further, please give me a certificate.

When he came back, he asked: When was the last time the puppies had water?”

The breed was brought back to Hungary, and more puppies followed. Determined breeding resumed in 1968 which was when the FCI accepted the official standard and recognized the Transylvania Hound as Hungary’s 9th breed.

In 2012,  about one hundred pedigreed Kopé puppies were registered with the FCI, nearly all of them born in Hungary or Transylvania. In 2013, twenty-two puppies were born or registered by breeders in the United States

One thought on “The Most Endangered Hungarian Dog Breed**”