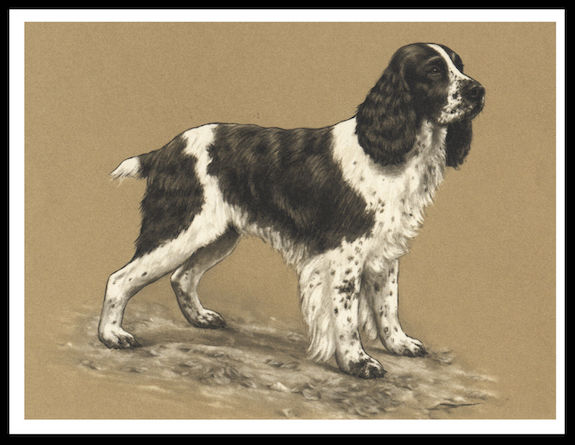 A few days ago, a teenager from Cedar Park, Texas, broke two Guinness World Records. One is for having the longest legs for a female, and the other is for a teenager with the longest legs.  In fact, 60 percent of seventeen year old Maci Currin’s total height is her legs. You can see more about the good natured Maci in this video.

Maci helps us transition to the English Springer Spaniel, a breed in which “long” should hover in the back of one’s mind when gazing upon the dog. The neck is moderately long, the ribs are fairly long, the ears are long, its stride is long – and while all of the aforementioned “long” aspects are in the breed standard, a specific mention of long legs is not. That said, the English Springer Spaniel should have a good amount of leg length that, from the elbow to ground, should equal the distance between the elbow and top of the shoulder blade. This is an efficient trotter which means this is a dog who keeps his legs on the ground for long bits of time on each stride. Feet that aren’t on the ground aren’t working. They’re not moving the body forward with front legs that swing forward from the shoulder blade, and they’re not being driven by the hind end that provides forward thrust. The longer the rear paw stays on the ground aided by forceful openings of the hips, stifle and hocks joints, the more efficient the gait will be. Even to an untrained eye, a correctly structured English Springer Spaniel exudes athleticism born of power, agility, and endurance. Think Energizer Bunny.

Mind you, this can be overdone. An ESS that is too long in body, particularly if he’s long in the loin, won’t just lack the breed’s characteristic silhouette because the proportions are thrown off, he’ll tire easily in the field.