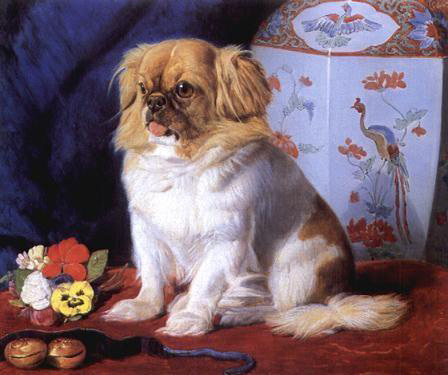 “This little dog was found by me in the Palace of Yuan-Ming-Yuan near Pekin on the 6th of October 1860. It is supposed to have belonged to either the Empress, or one of the ladies of the Imperial Family. It is a most affectionate and intelligent little creature – it has always been accustomed to being treated as a pet and it was with the hope that it might be looked upon as such by Her Majesty and the Royal Family that I have brought it from China.”
This was written by John Hart Dunne, Captain of the 99th Regiment of a Pekingese Her Majesty, Queen Victoria, would name, “Looty.” In his own journal, Capt. Dunne wrote, “I have been able to retain a good many trifles that I bought in the French camp, also a pretty little dog, a real Chinese sleeve dog. It has silver bells round its neck. People say, it is the most perfect little beauty they have ever seen.”
It’s thought that “Looty” was four or five years old when she was taken from the Summer Palace in Peking. She lived out the rest of her life as one of Queen Victoria’s favored pets and died in 1872 at the age of sixteen. Her grave is unmarked.
Oil on Canvas painting of “Looty” by Friedrich Wilhelm Keyl, 1861

One thought on “Looty”