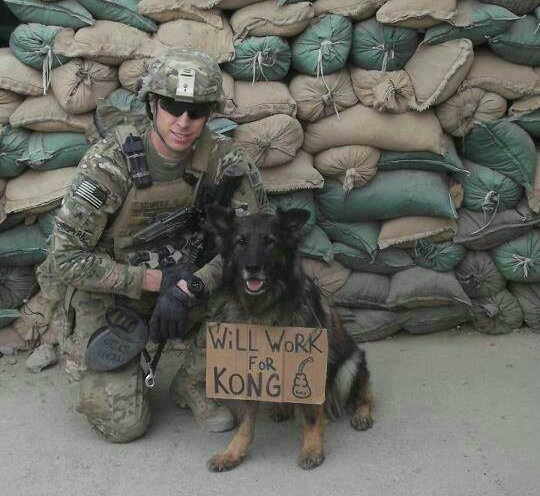 It seems a little thing to give in return for service to one’s country, but military dogs are rewarded for their hard work with a Kong toy (as well as their handler’s heartfelt praise). In fact, military dogs are selected, in part, for their love of a ball –  or better yet, a Kong toy, and they have a German Shepherd Dog named “Fritz” to thank for it.

Joe Markham really loved his trained police GSD, “Fritz.” Fritz’s destructive chewing habits, not so much.  Fritz loved to chew on rocks and sticks, and those of us who’ve lived with a dog with a taste for stones and wood know that it rarely ends well. Joe was concerned, but had little idea what to do about it.

One day while he working on a VW Bus, Joe began tossing car parts to Fritz to get him away from those rocks.  It was a rubber suspension part that interested Fritz, and when he dropped it in Joe’s lap hoping that they’d go play with it, the strange and unpredictable bounce of the rubber, to say nothing of its toughness, gave Joe an idea. As he perfected the toy’s shape, a pal mentioned that Joe’s new dog toy invention looked like “an earplug for King Kong,” and voila, a brand name was born.  In 2005, the book, Planet Dog: A Doglopedia, called the Kong “possibly the best-known dog toy in the world.”

Some dogs make mincemeat of the Kong, tough as it is, and owners of these “jaws of life on four paws” may find a recent review of tough dog toys helpful.

Photo from the article, “Dogs of War: 23 Facts You Never Knew About Military Working Dogs