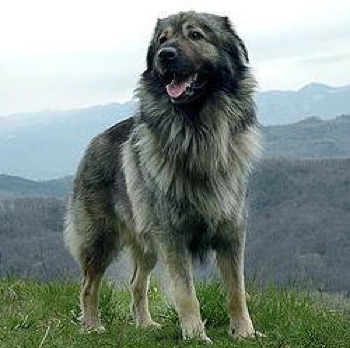 The oldest native dog breed in the former Yugoslavia is a molosser named the Karst Shepherd, a breed closely related to the Sarplaninac for which it is sometimes mistaken (the Karst Shepherd is smaller). The breed comes from the Slovenian region of the Karst Massiv, one of the successor states of the former Yugoslavia. Now considered to be a living part of the country’s history, the Karst was granted the honor of being a Slovenian natural treasure.

As if often the case with an old breed, the Karst’s earliest origins aren’t certain. Some experts maintain that the breed splintered off from the Caucasian Shepherd Dog and Romanian Shepherd, but others point out the breed’s structural similarities to the Pompeii dog, and this theory has no less a proponent than the renowned explorer, Professor Strebel, who reported that the Karst Shepherd, the Swiss Shepherd, and the German Rottweiler may have descended from the Pompeii dog.  A third theory holds that ancestors of the Karst Shepherd were the Greek Molos that came into the Krast region with the Illyrians.  We may never really know. What we do know with more certainty is that the breed was vividly described in the Glory of the Duchy of Carniola written by the historian, Janez Vajkard Valvasor, and the year was 1689.

If you’ve read this far, and the breed’s name remains unfamiliar to you even though you think you know more about dog breeds than most, it may be because the dogs were originally named Illyrian Shepherds. Together with the Sarplaninac, the Karst Shepherd was labeled an Illyrian Shepherd, but in 1968, the two breeds were separated by the Central Society of Yugoslavia into the Karst Shepherd Dog and the Sarplaninac, and they have been considered two distinct breeds independent of each other ever since.

“At home,”  the Karst Shepherd is still performing the original task for which it was developed, which is as a flock guardian and herding dog. Like many working farm breeds, the Karst Shepherd has been found to be a fine companion dog, as long as owners remember that this is a working breed that needs consistent and positive training method, as well as adequate exercise –  the Karst has high exercise requirements.

Currently, the Karst Shepherd is recognized by the United Kennel Club and the Federation Cynologique Internationale (FCI).  Estimates put Karst Shepherd numbers at 600, a positive uptick from the 400 pups that were being registered yearly in the 1980s, and a far cry from the 18 puppies that were registered in 1924.