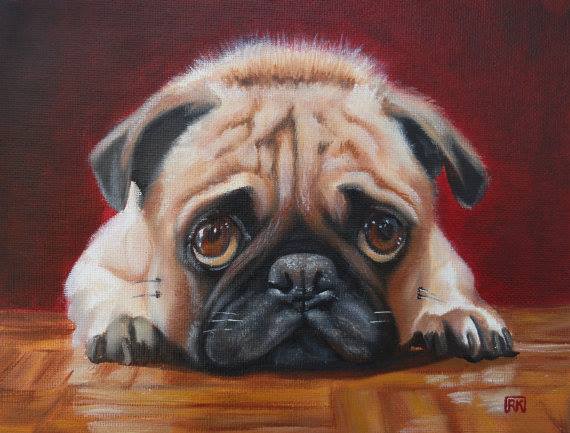 We are nothing if not capable of going wildly off point to make a point. To set the mood for this topic –  we offer a 2 minute musical diversion below:

As an aside, Alannah Myles won the 1991 Grammy for Best Female Rock Vocal Performance for this song. It was said to be a tribute to Elvis Presley whose portrait was often painted on black velvet, and who used a hair dye named Black Velvet.

But back to dogs.

Most dogs have a spot somewhere on their body that feels “soft as velvet,”  but only a few breeds actually call for a velvety texture in their breed standards, and not all of them involve soft ears. Can you guess which breeds?

From the Pug AKC standard: “The ears are thin, small, soft, like black velvet.”

From the Basset Hound AKC breed standard: “The ears are extremely long, low set, and when drawn forward, fold well over the end of the nose. They are velvety in texture…”

From the Keeshond’s standard: “Head, including muzzle, skull and ears, should be covered with smooth, soft, short hair-velvety in texture on the ears.”

From the Bedlington Terrier’s AKC standard: “Ear tips reach the corners of the mouth. Thin and velvety in texture, covered with fine hair forming a small silky tassel at the tip.”

The Dandie Dinmont Terrier’s breed standard for the AKC: “The body of the ear is covered with short, soft, velvety hair.”

The Norfolk Terrier’s standard: “Ears: V-shaped, slightly rounded at the tip, smooth and velvety to the touch.”

From the Scottish Terrier’s standard: “The ears should be small, prick, set well up on the skull and pointed, but never cut. They should be covered with short velvety hair.”

The West Highland White Terrier’s AKC standard: “The hair on the ears is trimmed short and is smooth and velvety, free of fringe at the tips.”

Only one breed calls for a velvet texture somewhere other than the ears: From the AKC breed standard for the Bichon Frise: “Coat: The texture of the coat is of utmost importance. The undercoat is soft and dense, the outercoat of a coarser and curlier texture. The combination of the two gives a soft but substantial feel to the touch which is similar to plush or velvet and when patted springs back.

There is also a breed standard in which velvet is called for, but it has nothing to do with the dog, but with livery, or the special clothing worn during a hunt. It appears in the Beagle’s AKC breed standard and calls for a black velvet cap.

As for our post title, a small history lesson: Supporters of the deposed James II and his descendants in their claim to the British throne were delighted when King William III died in 1702 as a result of injuries suffered when his horse tripped over a mole hill. A favorite toast of these people became, “To the Little Gentleman in the Velvet Coat” (meaning the mole)