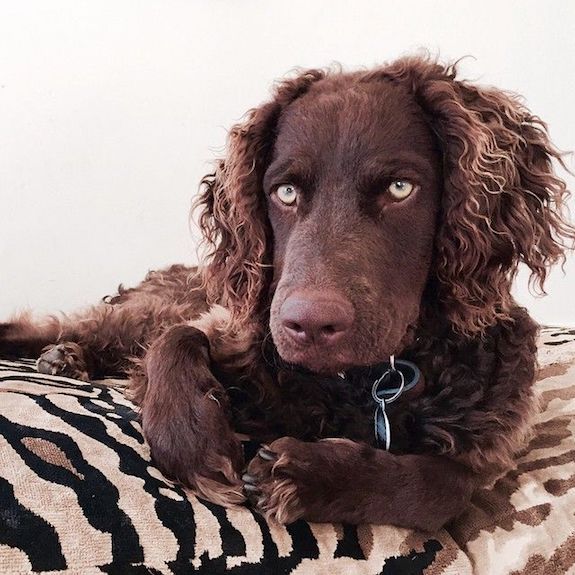 The last time we talked about “the Murray” on these pages, the breed was known as the Murray River Curly-Coated Retriever, and it wasn’t recognized by any major kennel club.

That all changed the other day when the first Murray River Retrievers (as they’re now known) were exhibited at the Adelaide Plains Kennel and Obedience Club in South Australia*, officially becoming Australia’s only home grown gun dog. Take a look at the darling puppy class:

If the breed looks a little familiar to you, say, like an Irish Water Spaniel or an American Water Spaniel, there’s a reason for that, though those reasons vary among sources.

One school of thought is that American Water Spaniels came to the Murray River with American river boat captains steering steamers in the 19th century. Another is that the now extinct Norfolk Retriever was a source of the breed, its similarity to the Murray uncanny as Hugh Dalziel described it in his book, British Dogs, published in 1879.

Dog News Australia, citing the marvelous Australian judged and writer, Jane Harvey, offers another theory: Between 1845 and 1852, around 25% of Ireland’s total population starved to death from Ireland’s potato famine. Nearly a million people fled to other countries, Australia being especially attractive because if offered sponsored passage to free settlers. Many Irish folk brought along their trusted Irish Water Spaniels, and while some sought their fortunes during the gold rush around Ballarat and Bendigo, others settled along the Murray River in the southern part of the continent. There, ducks and wild game were a major source of protein, but it took a special type of dog to retrieve ducks off punts (a narrow, flat bottom boat), and the dogs were adapted to fit in the boats. Early settlers came to call the dogs Murray River Retrievers.

Some experts believe it is likely that the American Water Spaniel and the Murray River Retriever were developed from Irish Water Spaniels brought to their respective countries by Irish people fleeing starvation, but DNA testing in 2012 demonstrated that the Murray had become a distinct, diverse and separate breed on the gun dog spectrum not closely related to any other gun dog. Additional DNA sampling via Embark (USA) and Orivet (Australia) studied the Murray genetics and also declared them to be far enough removed from their retriever and spaniel ancestry to be declared their own breed. The Murray River Retriever Association supported the finding: The Murray is a distinct breed with no close relatives.

*The show judged by N. Lane was live streamed by Kylie Christison and shared with us by Caroline C.

6 thoughts on “Meet the Murray”