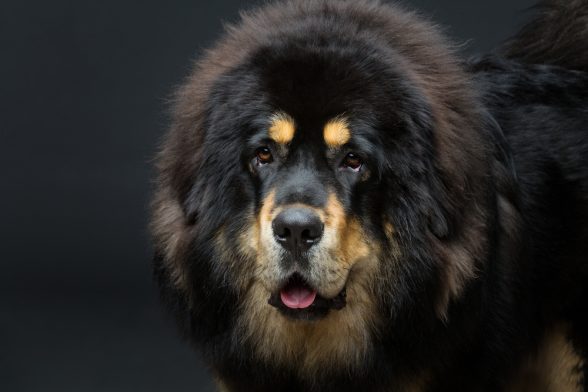 We’re big fans of handed-down wisdom regarding our different breeds, and we cite no less an authority than His Eminence, the 5th Gonsar Rinpoche with regards to color in a couple of Tibetan breeds. Born in Shigatse, Tibet in 1949, His Eminence is the present incarnation in the line of Gonsar Tulkus,  practitioners of the Hayagriva Tantras (traditions of Hinduism and Buddhism) and known for their ability to deliver clear, precise and logical teachings.

According to Rinpoche, Tibetans prefer black and tan in guard dogs like the Tibetan Mastiff, the dark coloring thought to make more of a “don’t even think about entering this house” impact on intruders. The tan spots above the eyes give a quick impression that the dog is awake even when he or she is asleep. Furthermore, the “four eyes” also believed to be able to see demons, and thus protect the house and its occupants from these evil spirts.  The AKC standard for the Tibetan Mastiff allows black, brown, and blue/grey colors, “all with or without tan markings ranging from a light silver to a rich mahogany; also gold, with shades ranging from a pure golden to a rich red gold.”  Furthermore, tan markings may appear “above eyes as spots.”

Rinpoche says Tibetan Spaniels (also called “Simkhyi” which means house dog or dog of the bedroom) are the dog of highest order and kept as Lama dogs or with aristocrats. The AKC breed standards allows all colors, and mixtures of colors, but according to His Eminence, while black and tan colors are popular in Tibetan Spaniels, as well as yellow and gold, a black dog with a white chest spot is especially favored because the white spot stands for a pure heart. A white spot on the forehead is also auspicious as it is considered a sing of Buddha, and indeed, Tibetans call it the Buddha Mark. White feet are acceptable, but a white tail-end is associated with stolen tormas, small figurines made of butter and tsampa, a nutty-tasting flour made from roasted barley.

In the Tibetan Buddhist tradition, a Kora is a clockwise walk around sacred monuments which the Buddhists complete, praying and sometimes prostrating. It is typically a part of a pilgrimage, ceremony, celebration or ritual. Rinpoche says that Tibetan Spaniels often accompany their master to the Koras, and always take part in the rituals which often include offering tormas (little wonder that stealing one is frowned upon), but after the rituals, the tormas are given to the large black ravens sitting on roofs, and to the dogs in front of the monastery. Indeed, Rinpoche says that Tibetan dogs mainly eat tsampa and leftovers, the Mastiffs from large bowls, and small dogs fed “pag” by hand, a Pag being tsampa mixed with butter. Occasionally, the dogs are treated to tsampa cooked in broth from bones (and a bone is added).

We conclude with a sentiment we found on Buddha Weekly, a non-profit association dedicated to free Buddha Dharma education:

Dogs live in the moment. Every moment with their owner is happiness because they are with the person they love unconditionally. They do not complain about their day or when they are in pain. They are greeting you with kisses and tail wags when you come back from work because they feel joy and love. Dogs are grateful for the time you spend with them and are understanding when you do not have time to play. They do not hold resentment when scolded because they do not dwell on the scolding. They live in the happiness of being with their owner — in the mindful, present moment.