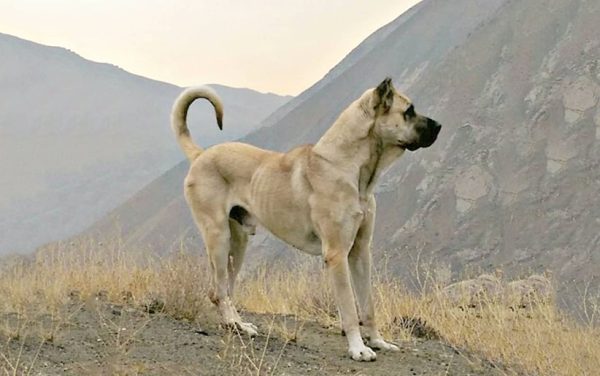 Nestled amongst the high mountains of Bozqoosh and Sahand in northwest Iran is the township of Sarab, a place famous for its earth toned and brilliantly woven rugs dyed with natural vegetable and root dyes.

Sarab is not known for the rare breed of mastiff originating there, the Sarabi Mastiff, also known as the Persian Mastiff, Iranian Shepherd Dog, and Azarbaijan Mastiff. This giant breed is believed by some experts to be Iran’s oldest breed of dog, a livestock guardian dog used by local shepherds for centuries to protect their sheep and goat herds from bears, wolves, jackals and other predators. It is not, however, recognized by any major kennel club in the world.

According to legend, the Sarabi is a descendant of the famous Peritas, a dog that saved Alexander the Great from certain death. Other lore says the Sarabi Mastiff descended from a Tibetan Mastiff brought to the area by the tyrannical King Xerxes.

The Muslim conquest of Persia in 633–654 AD not only obscured much of the breed’s history, but saw the abuse of the dogs to demoralize the local culture. Before the conquest, Iranians loved and treasured dogs. The state religion was Zoroastrianism which was explicit in the promotion of dogs as good and godly creatures. Indeed, Zoroastrians believed that the bridge to the afterlife was guarded by dogs, and kindness to them in this world resulted in rewards in the hereafter. After the Islamic conquest, invaders tormented the dogs to distress the populace and humiliate a nation. There are indications, too, that the great dog was used to fight big animals such as lions.

We should mention that some believe the Sarabi is identical to the Kangal Dog. One source writes, “In Turkey they like to call this dog a Turkish Kangal. It is open to discussion if they are the same breed or not.” We’re just going to leave that there because we honestly don’t know.

Moving on, this is a big dog! On average, a Sarabi can measure between 28 inches to 35 inches at the shoulder, and weigh between 120 to around 200 pounds, his weight corresponding with his height. These heavy boned mastiffs come in fawn, sable, and black. They are very bright, fiercely independent, and highly affectionate to their family, but distant and unaccepting to anything or anyone they regard as a danger to themselves or their own.  They have a high prey drive, and are most decidedly not for an inexperienced owner.

We found it curious that a few sources describe the Sarabi Mastiff as the National Dog of Iran, curious because as of a July, 2022 report coming from the Sophia News Agency, Iran’s parliament is considering a bill that would allow the ownership of pets only with a special permit because they are a “symbol of the West.”  The same article includes this statement from the chairman of the Iranian Veterinary Association:  “If the parliament passes this law, future generations will remember us as the people who banned dogs because they are dogs and cats because they are cats.”

Such a change of fortunes. In the past, Iran was one of the first Middle Eastern countries to pass an animal protection law. Even the royal family owned dogs. The Islamic Revolution in 1979, however, changed everything, and dogs came to be considered unclean animals. That aside, as it stands today, the breed is rare by most standards, and could use a concentrated effort be saved.

You can see more photos of this breed at the Instagram page of sarabi.dog_persia