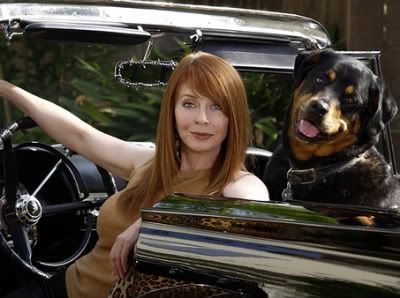 From the photograph seen here, one would never know they are looking at the Queen of Halloween, and all that is spooky.  One might not recognize her without her tight gothic gown with its plunging neckline,  the exclamation point that came just before she introduced a horror movie on television.  In a different persona, she’s known as Elvira, Mistress of the Dark, everyone’s favorite Valley-Girl speaking Queen of Camp and Horror. 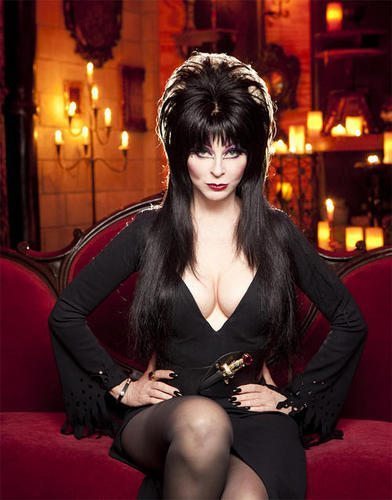 An unexpected biography for a girl born in Kansas, and reared in Colorado Springs, Colorado. The woman “behind” Elvira, Cassandra Peterson, parlayed a gig hosting a local horror movie show in 1981 to became the first horror host ever to be syndicated nationally. She went on to become an outrageous, if not beloved, pop culture icon who made commercials for Pepsi and Coors, and hundreds of film, television and live appearances that included The Grammy Awards, Saturday Night Live, NBC’s Today Show, and The Tournament of Roses Parade.

In “real” life, Peterson has used her popularity to support a number of causes, including animal welfare (not animal rights, there’s a difference!) She has included as part of her family two Rottweilers, including one named “Mina” (for a character in Bram Stoker’s 1897 novel, Dracula), and has been rescuing Rottweilers and Pit Bulls for almost 25 years.  In addition to her “Elvira-themed” books,  Peterson wrote, “Bad Dog, Andy: A Parody,” an illustrated book of a more-than-mischievous Dalmatian who, when left alone at home, lights up a cigar, raids the liquor cabinet, woos a French poodle and cranks up the music.

2 thoughts on “Mistress of the Dark”

We pride ourselves on butchering the best of lyrics to make a tortured point.... ...

The "My Little Pony" of the Dog World

Augie makes a liar out of those who sneer at those "miserable" unsound purebred dogs.... ...

Meet Augie, the 20-Year-Old Golden Retriever Who Might Have Just Set an Age Record