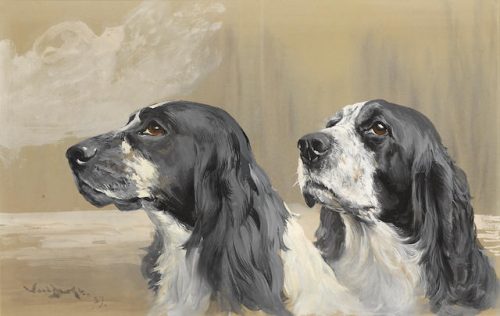 It would be accurate to say that Geraldine Rockefeller Dodge quite literally wrote the book on the English Cocker Spaniel, and it’s fitting that we mention her name two days after the conclusion of the 2021 Morris and Essex KC Dog Show, an event Mrs. Dodge created in 1927.

The ECS was by no means her only breed. During her lifetime, Mrs. Dodge had owned some 85 different breeds of dogs, but in later years, she concentrated on German Shepherd Dogs, Golden Retrievers, Beagles, Bloodhounds, and of course, English Cocker Spaniels. Reams of paper have been used to write about Mrs. Dodge’s contributions to the fancy, and to various breeds, but suffice it to say that she knew her stuff. She became the first woman to judge Best in Show at the Westminster Kennel Club, and the only woman to have judged it twice (in 1933 and 1940).

We end with a quote that Mrs. Dodge used to start her book, The English Cocker Spaniel In America:

“With eye upraised his master’s looks to scan, The joy, the solace, and the aid of man;
The rich man’s guardian, and the poor man’s friend, The only creature faithful to the end.”

One thought on “Mrs. Dodge and the English Cocker Spaniel”