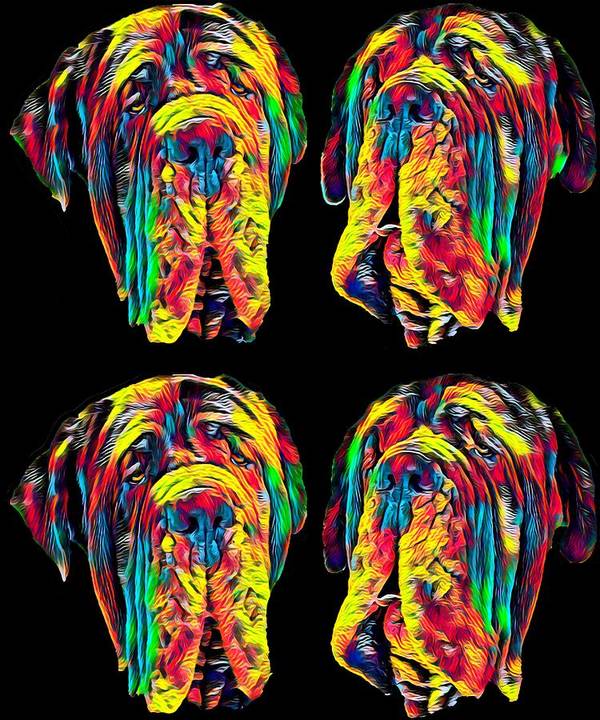 Unless we know someone who owns one, most of us who are lucky enough to see a Neapolitan Mastiff in the flesh get the sighting at a dog show. In that environment, dogs are usually (not always) gaited at a trot in the ring, but the AKC breed standard stipulates that the breed’s movement is “not flashy, but rather slow and lumbering.” Unless we’re ringside, that’s how most of see them as they walk from where they are “set up” to the ring. A Nea’s strides are “long and elastic, at the same time, powerful, characterized by a long push from the hindquarters and extension of the forelegs. Rolling motion and swaying of the body at all gaits is characteristic. Pacing in the show ring is not to be penalized. Slight paddling movement of the front feet is normal.” Italicized words are from the standard.

The breed’s startling appearance served it well in deterring “bad guys,” but anyone assuming the breed is slow and lazy does so at their peril if they are intent on harming family or home. The breed hasn’t not changed materially for the past 2,000 to 5,000 years, and while the breed is intended to do its job from close quarters, a Neapolitan can explode into action with surprising alacrity if he or she perceives a threat. First and foremost, these are guard dogs who won’t permit an attack, but if provoked, they won’t hesitate defend their own by charging with ferocity, and finishing with tenacity.

We share a video of the breed being playful and goofy, but it offers the sense this is not a clumsy breed. The music is kind of awful (our opinion), but it’s a loving look at a breed:

Image:Neapolitan Mastiff by Super Katillz is available in lifestyle and home decor items, as well as fine art prints here