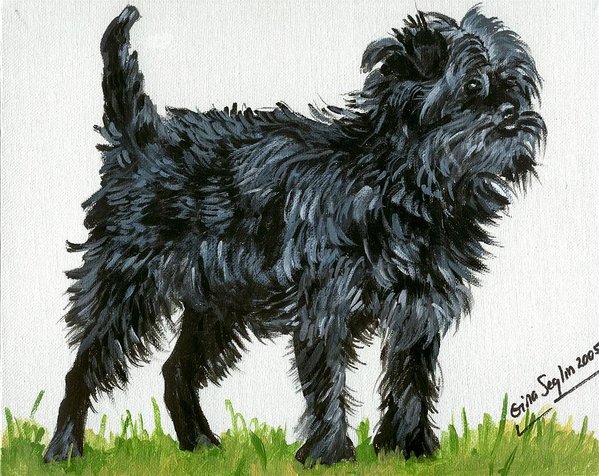 In homes where hamsters, ferrets and gerbils already reside, an Affenpinscher may not be the best fit of dog. Though not a terrier, the Affen works like one. That said, unlike some terriers, this is a peace loving breed intent on solving problems, and historically, the problem at hand was rodents. Rats, mice (hamsters and gerbils….),  anything small, skittery, and fitting the description of rodent was fair game when it was in a garden, a kitchen, a granary, stables, or a business. To that end, the Affenpinscher was developed to have a moderate forequarter and hindquarter angulation which enabled her to twist, turn, and pounce rather than pursue her prey over distance because that was how one caught a mouse.

Eventually, the Affen worked his way into the house beyond the kitchen not because he was charming, but because keeping mice and rats was especially attractive to women who at the time wore long skirts.

A mouse or rat scurried across the floor,  ran under the nearest shelter – a gown – and was essentially trapped particularly if the dress included layers of petticoats. It almost doesn’t bear thinking about, but what options did a mouse or rat have under the circumstances?

It couldn’t have been a good feeling, especially for the woman repulsed or horrified by small furry things. In time, Affenpinschers they became dual-purpose dogs: ratters by day, and by night, devoted bed-warming pals for the lady of the house.

*Musophobia is a fear of rats and mice