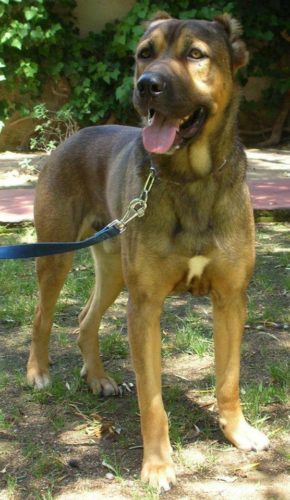 Among the many rare breeds we share with you is the Dogo Sardo (also known as the Dogo Sardesco), a relatively unknown breed outside of Sardinia, Italy. You might guess from the picture that this is a typical lightweight molosser.

While its history is fuzzy, the breed was mentioned as early as 1.800 – 1.100 B.C. through archeological findings that perfectly portrayed the dogs. It’s speculated that the Dogo Sardesco has been with the Sardinian people for over 3000 years, about 800 years before Sardinia was invaded by the Romans. It’s kept primarily as a property and livestock guardian dog, though it has also served as a hunting dog in the past.  Happily, the Dogo is getting more popular on mainland Italy. We’ll have more on this breed in the coming weeks.

Gone to the Dogs

We love discovering speech idioms that are rooted in our dog breeds, and “Gone to the Dogs,” is one such a phrase. The expression is used to complain about the way things are going, whether it’s how one’s favorite sports team is playing or the level of customer service at the local grocer. S...

True admission. The picture came first, we just had to figure out something to say with it beyond, "Isn't this the most beautiful photograph???" ...

Catahoula Leopard Dogs can be a challenging mix of hard-headedness and independence, but many owners are of the opinion that the breed is second to none as a stock dog. “Owning a good Catahoula dog is like having an extra right hand,” says one rancher. She shared her experience of a particularly...