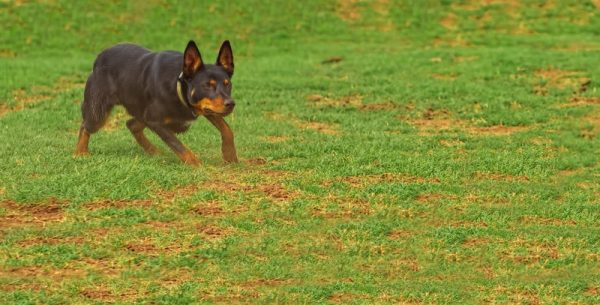 The other day, we came across a video showing a litter of Kelpie puppies that one day might become “muster” dogs.

To understand what a muster dog is (and we had to learn this, ourselves),  you first have to know what a grazier is. That one is easy. A grazier is a person who grazes cattle.

And when graziers have a gathering of livestock, usually to run health checks, brand the cattle or shear the sheep, it’s called a “muster.”

Mustering is a long, difficult, sweaty work – and it’s sometimes dangerous, especially on you’re working on a remote Australian sheep or cattle station.  For good reason, the group of animals gathered in an Australian muster is called a “mob” ( what we call a “herd” in North America).

By now, you’ve probably pieced out that a dog that helps with this kind of work is probably a “muster dog,” and you’d be right. It takes a particular skill set to be such a dog, and yes,  muster dogs are herding dogs, but dogs suited for this special kind of work have a particularly intense “strong eye,” This is to say that they adopt a low crouch, take quiet, controlled steps, and use what amounts to stalking a herd optically to track a herd’s movement. Think Border Collie on steroids.

Muster dogs are unique in that they control the movement of the herd with an exquisite sensitivity with their overall presence, but they don’t just control a herd, they control what the animals in the herd are doing. One grazier said in an interview, “I wouldn’t be on the land if I didn’t have my dogs. I couldn’t imagine trying to do it without them now. They have educated the cattle on how to behave. They have the ability to read the body language of the stock and communicate to them what they want.”

It goes without saying (only we’re saying it) that muster dogs are endurance athletes that are often called upon to work long hours in scorching conditions. During peak times, working muster dogs have been recorded traveling over 30-45 miles just in a work day.

The more we looked into this, the more we saw that most muster dogs tended to be Australian Kelpies, though we also saw the occasional Australian Cattle Dog.

If the topic interests you, you’ll certainly want to follow Aticia Grey who picked up her first team of Kelpies in 2013 and never looked back. She has an audio book on Amazon, but there is also a popular series, and the trailer below gives you a glimpse: