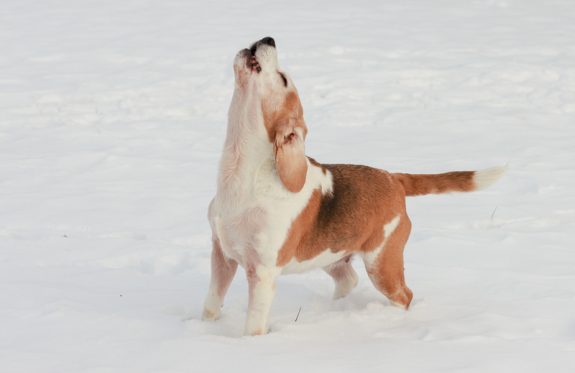 Like most scent hounds, a Beagle’s ears hang low and close to the dog’s face. When the dog picks up a scent, he lowers his head to the ground, and his ears fall forward essentially “hooding” the nose.  There is a lot happening in that simple action. The ears trap scent molecules and keep the smell close to the Beagle’s nose in which some 225 million olfactory receptors are activated to operate a “search and seize” smell mission. As a short dog with a long neck, a Beagle can easily reach track scents, and a damp nose helps scent particles stick to the nose. For good reason,  the Beagle ranks third in its keen sense of smell and is bettered only by the Basset Hound, and by the Bloodhound which has 300 million receptors. 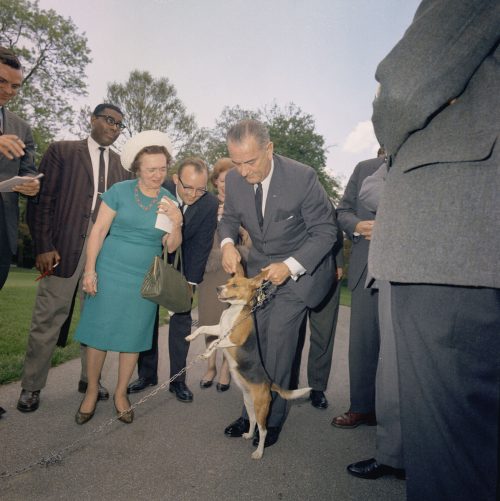 Photo taken by Yoichi Okamo, an employee of the Executive Office of the President of the United States, taken or made as part of that person’s official duties. As a work of the U.S. federal government, it is in the public domain.

In reading about Beagles as “scent machines,” we didn’t initially come across anything to suggest that it was common for rabbit hunters to tug on a Beagle’s ears to “tune” their voices before a hunt. This, however, was the nonsensical explanation that President Lyndon B. Johnson gave in 1964 when he lifted his Beagle (named “Him”) onto his haunches to get him to bay in front of reporters. According to Life magazine, Johnson said, “It does them good to let them yelp.” We did eventually come across an article by Michael W. Kramer in which the author cited a guidebook published in 1955 by George D Whitney. Whitney included only one reference and mentioned that, “as adopted by The National Beagle Club of America and approved by the American Kennel Club on February 13, 1935, the ears have an “entire absence of erectile power.”

What President Johnson had done didn’t just enrage animal lovers, it quite literally sicced the American Society for the Prevention of the Cruelty to Animals on him.  Johnson claimed he didn’t think he was hurting the dog, but virtually no one “bought it.”  The incident became fodder in the news and in newspaper editorial pages, and turned into a public bickering the President wasn’t going to win.  Ultimately, the incident turned into one of the most memorable presidential gaffes of all time.

There were those who came to Johnson’s defense and insisted the incident had been over publicized, and that Johnson was actually a lifelong dog lover partial to Beagles. They pointed out that the two Beagles with the President as the time of the ear-pulling incident (named “Him” and “Her”)  been sired by Johnson’s other Beagle named, “Beagle” (naming a dog wasn’t Johnson’s strong suit). They attended state meetings, met with visiting heads of state, and often slept in the presidential bedroom.  Johnson eventually bred “Him” to a dam and kept two Beagles from the litter, but he also got another Beagle from FBI director, J. Edgar Hoover.  Johnson named that dog “J. Edgar,” but shortened it to Edgar. Johnson loved Beagles, they said.

That may have been, but things ended poorly for Him and Her.  Shortly after the ear pulling incident, “Her” swallowed a pebble and died, and “Him” was hit and killed by a car driven by a secret service agent.

This didn’t leave the President dog-less. His daughter, “Luci,” found a mixed breed as a gas station and gave the dog to her dad. “Yuki” lived in the White House for the remainder of LBJ’s term. After Johnson left office, he recorded a curious record album, Dogs Have Always Been My Friends: Lyndon Johnson Reminisces. As well as tracks about growing up with dogs, the album includes a track of the former president “singing” along with Yuki.

President Harry Truman is quoted as having said, “If you want a friend in Washington, get a dog,” but it was dogs – or more accurately – how he handled the ears of one –  that landed Lyndon Johnson in the dog house during his presidency.