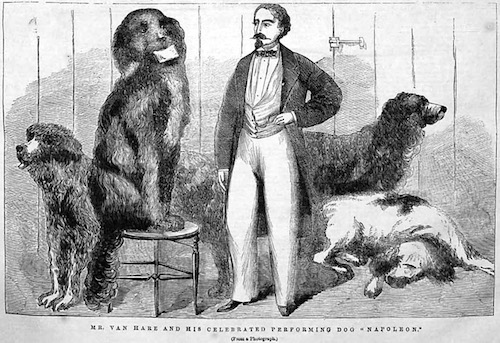 The announcement usually went like this: “By permission of his Grace the Duke of Wellington…”

G. Van Hare, the ultimate showman of the 1800s, took his show to nearly every European country during his fifty-year career. By today’s sensibilities, we cringe at some of the acts that were part of his circus, including one that had baboons dressed up as jockeys to ride dogs in a steeplechase routine.

In 1857, Van Hare purchased a nearly year-old Newfoundland pup whom he named, “Napoleon.” Billed as “Napoleon the Wizard Dog,” or the “Thousand Guinea Dog Napoleon,” the Newfoundland was said to be as smart as he was handsome; In an article published in the the Illustrated Sporting Times and Theatrical and Music-Hall Review from September 20, 1862, he was described this way:

“Napoleon, the Wizard Dog is a beautiful jet black, has limbs like a lion, and is perfect in symmetry in every point. He stands thirty-four inches high, measures forty-one inches round the chest, eleven inches round the fore leg, and seventy-nine inches from the end of his nose to the tip of his tail. His head is noble and handsome, full of intelligence, such as a Landseer would paint.”

“Napoleon the Wonder Dog” became a wildly popular act in London from his debut at the Pavilion Theatre on April 4, 1862, and while Van Hare had trained other Newfoundlanders (as they were known at the time), Napoleon was his favorite and he became Van Hare’s constant companion. It was said that Napoleon only needed to be shown a trick once to learn it, and he did many tricks that included playing cards, dancing to music, leaping over boards, spring-boarding across horses, and jumping through balloon hoops.

While performing at Evan’s Music Hall in 1868, Napoleon hurt himself when he slipped on a stage covered with oil cloth. When he jumped over a row of chairs, he lacked firm footing and fell upon landing. A highly respected veterinarian who examined him didn’t have a good prognosis. Napoleon died as a result of a serious inflammation, and a heartbroken Van Hare later wrote:

“This was the greatest bereavement I had ever experienced through life, he having been my constant and inseparable companion … I had beautiful mourning cards got up purposely for him … ‘In memory of Mr. Van Hare’s Celebrated Dog ‘Napoleon’ who died 24th April 1868, aged 12 years. He was the most noble, sagacious, and affectionate of animals, and a universal favourite in every country he visited. – ‘He was a dog, take him for all in all, we shall not look upon his like again.”

Napoleon’s passing was announced in a number of British newspapers, including the Sheffield Daily Telegraph which wrote:

“He was a noble specimen of the Newfoundland breed (weighing near 200 lbs.) for which he took the prize at the first Agricultural Hall Dog Show. Besides his magnificent appearance and symmetry, he was the most extraordinary sagacious and highly-trained animal ever known. He is now being preserved and beautifully mounted by the celebrated naturalist, Mr. Edwin Ward.”

Asking a twelve year old Newfoundland to jump over a row of chairs is, how to put it, baffling, and that’s being kind. It was a different time to be sure, and we take no joy in sharing a sad tale, but breed owners are interested in their breeds, and the fact that the Newfoundland had a stint as a circus dog isn’t widely known.

Readers interested in learning more about Van Hare might want to investigate the book, “Fifty Years of a Showman’s Life, Or, The Life and Travels of Van Hare” written by Van Hare, himself.