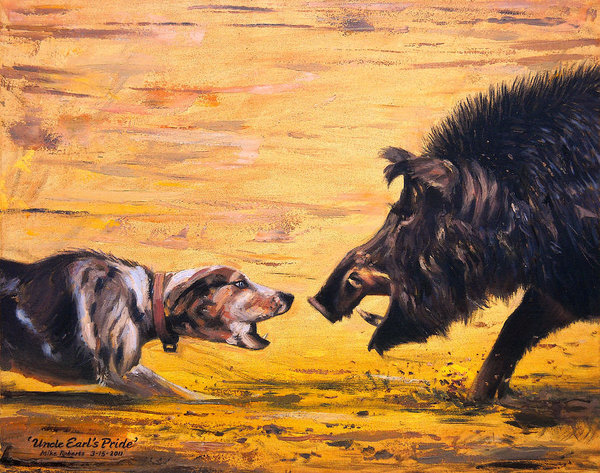 With the recent passing of Jim Lehrer, a longtime PBS News anchor and moderator of a dozen presidential debates, we are reminded of one of his contributions: The Story of English. The Emmy Award-winning nine-part television series co-produced by MacNeil-Lehrer Productions in 1986 detailed the development of the English language. If you’ve ever wondered why a southern accent as spoken by a Texan is different from a southern accent as spoken by an Alabamian, or why a southern accent exists at all,  you would love The Story of English.  The conclusion gives credence to the view of some linguists that language is a living thing that grows, changes, and reproduces itself with each generation.  You can get a taste of the series in the video below:

The word, “curredogge,” is a reasonable example to use as a word with “legs.” Back in the day, say, around the 13th century, curredogge referred to a useless or cowardly dog. It morphed into a term for a dog of mixed ancestry, then hopped species when it was hurled as an insult towards a low bred man. Eventually, the disparaging word was leveled at any man perceived as despicable, and by then, the word had been shortened to “cur.” It wasn’t done yet, however, being a word that “grew.”

At one point in the southern United States, a cur was thought of as a type of dog acknowledged by the job it performed, a name similar to “terrier” or “hound.” Curs could exhibit immense variety, but they had in common drop-ears, prodigious athleticism, and strong hunting and herding instincts. Over time, these descendents of dogs brought to the American south by immigrants evolved into several “types” to meet the needs of different climates and functions, and specifically, dogs that were purpose-bred treeing hounds. They were called “curs,”and they had their regional differences reflected by their names: Bavarian Cur, Canadian Cur, American Leopard Cur, Western Mountain Cur, Southern Black Mouth Cur, Florida Cur, Henderson Cur, Kemmer Mountain Cur, Parnell’s Carolina Cur, Stephens Cur, Treeing Cur, and Yellow Black Mouth Cur. Yes, there are many of them, and we suspect we even missed a few.

Four of the curs not yet mentioned would go on to become recognized by the United Kennel Club: The Black Mouth Cur,  Mountain Cur, Stephens Cur, and Treeing Cur. Of those, the Mountain Cur would become part of the AKC family, its current status is part of the FSS, or Foundation Stock Service.

More people might be familiar with the Black Mouth Cur. The first one registered with a national kennel registry was known at the time (1964) as the Ladner Black Mouth Cur, named for L.H. Ladner, the most well-known and respected breeder of the dogs  until his passing in 2009. These dogs had been in the Ladner family for over 200 years, and current Ladners maintain L.H.’s legacy by going forward with his breeding program.

It isn’t an exaggeration to say that Cur dogs helped poor southern farmers survive by helping them feed their families. Curs were working farm help, and “hog dogs” who hunted down wild pigs and latched onto an ear until the hunter came to dispatch that night’s dinner. Their phenotype was developed to fit their environment. Generally speaking, southwestern curs were typically larger dogs with longer legs, and their strong working instincts applied to a wider range of territory. Curs from the deeper south as found in Louisiana and Florida were heavier-boned dogs well adapted to swamplands found in those areas, while curs from the Southeastern mountains tended to be smaller, shorter and stockier, work within a closer range to the handler, and were more tree-oriented.

Many of the cur breeds aren’t acknowledged by a nationally established registry because they have standards that are relatively “loose” or “flexible” in terms of appearance, and this is of little consequence to the breeders who assert that their breeding programs focus on working mentality and physical ability. That said, many curs have been breeding true for generations and are as distinct from each other as terriers are to each other. The little black dogs bred by the family of Hugh Stephens in Kentucky, for example, became sufficiently distinct that they were recognized by the UKC as a separate breed, and we know these dogs as Stephens Curs. They bear little resemblance to a Carolina Cur which is smaller and also comes in brown, or to the Mountain Cur which can be larger, and appear in brindle, black, brindle and black, and yellow.

One way that the word, “cur” has not been used is in the context of heroism. These dogs are very protective of their family, and stories are legion of dogs that have kept a child from running out on the road where he would have been hit by a car, or killed a snake about to bite the dog’s owner.

Cur owners are devoted to their dogs because of their dogs’ devotion to them.

4 thoughts on “The Evolution of Cur – and Curs Today”