Of the all the breeds in the world, it’s possible that the Canaan is among those that have changed the least since antiquity. The 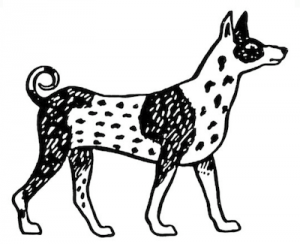 image below is one of several drawings found on the tombs at Beni-Hassan dating 2200-2000 B.C. The image at the left (grabbed off WikiCommons and thought to have been contributed by Alexandra Baranova) is obviously taken in modern times. There isn’t a lot of difference, is there?

Feral ancestors of the Canaan Dog – the middle eastern Pariah Dog – originated in the “Land of Canaan” in pre-biblical times.  These early canines have been referred to as “proto-dogs:” Dogs with budding social skills that enabled them to approach and interact with humans, and flexible when it came to problem solving.

After the dispersion of the Israelites by the Romans over two millenia ago, the Canaan Dog’s population dropped, along with the Hebrews’. Most of the dogs sought refuge in the Negev Desert, and many followed Bedouin Nomads, living on the fringes of camp while scavenging for a living, not really belonging to anyone. On occasion, a Bedouin would notice an exceptional pup in a litter and take ownership of it to use as a herding dog or guard, but the dog still lived on the edge of camp and either foraged or lived off of scraps. According to the site, Better Canine Health, if a Bedouin was asked to whom the dog belonged, they would answer, “Allah” because they didn’t view the dog as theirs.  The breed avoided extinction, but also remained largely undomesticated (though those who followed the Bedouin retained a form of domesticity).

A new chapter for the breed came with rediscovery by Dr. Rudolphina Menzel. Menzel was a world-renowned specialist on animal behavior and Viennese emigre who’d been asked by the Haganah around 1936 (a Jewish paramilitary organization) to develop a dog that could guard isolated Israeli settlements, as well as oversee the build-up of war dogs for the fighting of the War of Independence. Menzel recalled the Pariah Dog living in the desert, and correctly knowing that only the fittest dogs would have survived the hardships of such a life, she captured specific individuals to developed the Canaan Dog breed.

The dogs excelled at every task they were given. After the War of Independence, Dr. Menzel began training them as seeing-eye dogs for the blind and therapy dogs for the disabled. So respected was the breed that it became the Official National Dog Breed of the State of Israel in 1953.

One of Dr. Menzel’s students was Myrna Shiboleth who’d immigrated from Chicago to Israel in 1969. She’d been an animal trainer and also served as a research technician on animal behavior at Tel-Aviv University. In 1970, Myrna established a kennel at Shaar Hagai 20 km. west of Jerusalem for the sole purpose of breeding the Canaan Dog.  Not long ago, Shiboleth reestablished her kennel in Europe, and NPDD is honored to have her as a friend.

A “Times of Israel” article offers better insight into the breed’s early history which can be found here.

2 thoughts on “The National Dog of Israel”