He was only the third African American to receive an Academy Award nomination for best actor when he was honored for his performance as “Nathan Lee Morgan,” the loving sharecropper father in the 1972 classic, “Sounder” (he lost to Marl 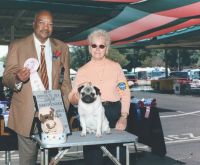 on Brando for his role in “The Godfather”).  He also won Emmy Award nominations for his portrayal of Dr. Martin Luther King in the TV movie King, and for his portrayal of Dr. Horace Huguley in Roots: The Next Generation.  He appeared in Star Trek II: The Wrath of Khan, as well as the Terminator. He was tall and imposing, but also genial and low-key. His name was Paul Winfield, and he was a Pug breeder and enthusiast who showed his dogs under his Avoncliff prefix.

In the 80s, Winfield got the first of several Pugs from Blanche Roberts who would become a friend and mentor. He came to narrow his focus on black Pugs, most of whom had Shakespearian names (1990, he had “Oliver,” Othello,” “Phoebe,” “Bubbi” and “Desdemona”), and all of whom had run of the house, Winfield not being a fan of crating them at home.  He and his partner, Chuck Gillen, were active in local and national Pug clubs but poor health forced him to stop exhibiting (he’d fallen into a diabetic coma while attending a dog show in Denver and was hospitalized for three weeks).

Paul Winfield in Star Trek: The Wrath of Khan

In 2004, Winfield succumbed to a heart attack at the age of 62 and left behind seven Pugs and over 600 ceramic and bronze pug figurines, two of which are in the thumbnail image.