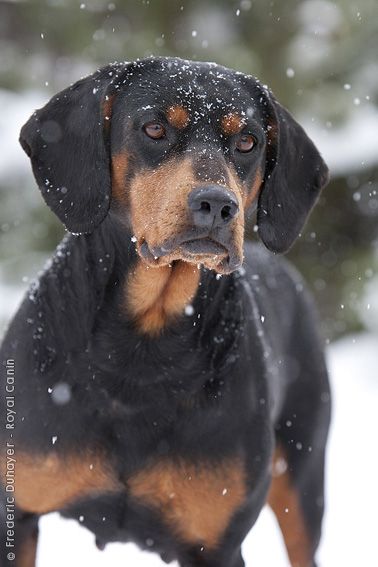 You have to admire a dog who knows what it wants. In spite of a well-honed hunting instinct, the Black Forest Hound will hunt only wild boar. Not deer, not hare, but boar – the other white meat. Selective breeding for being a “wild boar specialist” has produced a breed keenly admired by hunters for its tenacity, agility, super sensitive scenting prowess, and interestingly, a fabulous sense of direction. These days, the hound is also used on other game.

In its native country, the breed is called the Slovensky Kopov (Slovak Hound), the name, “Black Forest Hound,” being a misnomer since the breed wasn’t developed anywhere near the Black Forest. It’s been suggested that the latter was created to market and popularize the breed in North America, though we’re skeptical of the success of that strategy since the breed is somewhat hard to come by.

First recognized as a breed in the late 19th century, it’s probable that the Black Forest Hound was the result of crosses between the Chart Polski, Brandlbracke and Magyar Agar. As the only dog breed native to Slovakia, it’s no surprise that it’s also the National Dog of Slovakia.

Black Forest Hounds are devoted and loyal, and gently affectionate with children. Some have described these dogs as dominant with other dogs and smaller pets, but that they’re also highly adaptable.

Image found on Pinterest via Royal Canin of Canada

3 thoughts on “The National Dog of Slovakia”

Smooth and glossy, weighty and substantial, Le Creuset - the pricey but beautiful and well-crafted enamel Dutch ovens, were first created in 1925, and are still made in the same foundry in France. Fans say that Le Creuset pots are really as good as everyone says they are, and worth every dime. Now you get some for your dog. ...

In 2016, this was the most-watched Christmas TV advertisement worldwide on YouTube with more than 20 million views. If you don't laugh even a little at the end of it, check your pulse. ...

Just TRY to Stifle a Chuckle

“Biff,” the five year old Boxer, was given newfound celebrity status in a recent commercial coming from John Lewis, an upmarket department store in the UK. The highly anticipated commercial that came out in time for Christmas, 2016, is one we think is sure to elicit a little chuckle no matter ho...

I'd like to share a brag - not a win, but an experience from Meet the Breeds this weekend. I was telling a woman a little about the history of Neapolitan Mastiffs, and mentioned that while most people in the fancy aren't against mixed breeds or rescue (far from it, at least for me and most people I know), we use the term Preservation Breeder because breeds are an important link to culture and history. It was so cool to see a lightbulb go on over her head - she'd never thought of it that way. This page has really been instrumental in raising my consciousness enough so that I could express the thought
clearly. ...