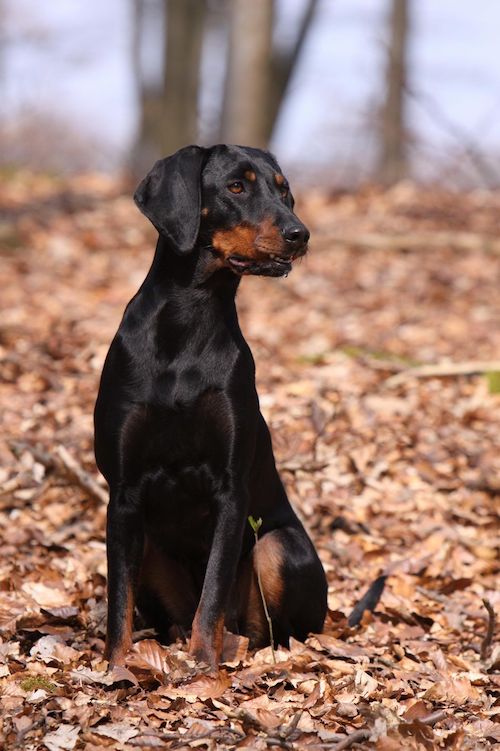 In its homeland, the Austrian Black and Tan Hound is commonly known as the Brandlbracke which loosely translates to, “Fire Hound,” because of the “fire” colored markings on its coat. Needless to say, coloring in this breed is highly important. It must be black with small, clearly defined, light to dark fawn markings, and fawn marks above each eye must be present. The pips above the eyes, by the way, have led to the breed also being known as Vieraugli  – or four eyed.

Despite its name, the Austrian Black and Tan Hound is thought to be a true descendant of the ancient Celtic Hound (Keltenbracke, in German), an ancient type of dog most often described as a Greyhound that lived in areas populated by Celtic tribes. This ancestor is a common to both the Austrian Black and Tan Hound and the Tyrolean Hound, two breeds in a hound group that Austrians call “Grand Brackes.” The Styrian Coarse-Haired Hound is the third hound in that group.

Known in Austria for at least 150 years –  and possibly much longer – the Austrian Black and Tan hunted in high altitudes and was traditionally used in small to medium-sized packs that were followed on foot. The breed is still prized by hunters for its ability to do heavy work and track wounded game in high mountains; that present day Austrians can still enjoy the breed is due to it having survived two world wars and continuous urbanization by living rural and remote regions when many other hunting breeds vanished or came close.

The breed has influenced other breeds, namely the Slovensky Kopov (or Black Forest Hound) and the Alpine Dachsbracke, and some cynologists, despite there being no proof, feel the breed also figured in the ancestry of the Rottweiler, Weimaraner, and Doberman Pinscher.

The Austrian Black and Tan Hound wasn’t recognized as a unique breed until 1884, the same year a standard was developed for it. The FCI accepted in it 1996 as the “Brandlbracke, Vieräugl” with the United Kennel Club following suit in 2006.