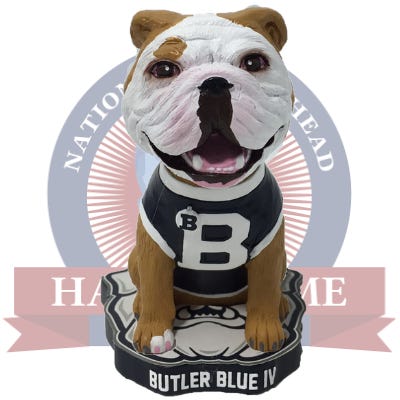 You know you’ve arrived when they make a bobblehead doll out of your likeness. More so when the National Bobblehead Hall of Fame and Museum includes it in their collection. And when you’re featured in a Netflix video, you’ve hit the bigtime.

All of the aforementioned have happened to the official mascot of Butler University, Butler Blue, a Bulldog. There have been four bulldogs to bear the name, and the most recent is “Butler Blue IV.” This “Blue” is easily identified by the marking above his right eyebrow.  A “Changing of the Collar” ceremony marked Blue’s succession to the mascot role this past February as part of pregame festivities for the final Butler men’s basketball home game of the season.  The ceremony saw the old mascot’s custom-made collar being passed to the new mascot, Blue IV. Sniff.

From Wikipedia: Blue IV was the only male among a litter of three puppies bred by Jodi and Cameron Madaj (pronounced “mayday”). They have a son who played soccer at Butler, and Jodi had regularly provided pregame treats for Butler’s live mascots since Blue II became the mascot in 2004. When Phillips examined the litter at six weeks of age he noticed the male stood out among the others. In an interview for the university, he noted, “There’s a lot to consider with bulldogs, and we looked at everything. He will be awesome. He is a super cool puppy. He is super easy going and not aggressive at all. Everything fell in line with this dog.” Blue IV spent the first several weeks after being unveiled meeting students and adjusting to his new role, and had completed a training course alongside Krauss at a local dog obedience school before the “Changing of the Collar” ceremony.

As for the new bobbleheads, they are of “Blues” I, II and IV. They join Butler Blue III and the puppy version of Butler Blue IV. Only 2,021 copies of each new bobblehead have been made, each available for $25 on the National Bobblehead Hall of Fame and Museum’s website.

“Dogs,” was released on the streaming platform, Netflix, and Season 2 included spots on Blue. Check out the trailer:

And finally, we note that before 1919, Butler’s athletic teams were known as the “Christians,” but too many losses in the 1919 football season caused Butler’s fans to grow weary of the nickname. Read: It was starting to feel unlucky. As Butler was facing its game with the heated rival, the Franklin “Baptists,” the editor of the school paper decided something “hot” had to be done for the school’s weekly pep session. About that time, a Bulldog named “Shimmy,  mascot of a Butler fraternity, wandered into the school paper’s office and an idea was born. The next school paper came out with cartoon showing Shimmy the bulldog, labeled “Butler,” taking a bite out of the seat of the pants of a figure labeled John the Baptist. The caption was: “Bring on That Platter, Salome!”

Butler lost the game, but the name “Bulldogs” stuck. By default, Shimmy was the first “Butler Bulldog” mascot. Other dogs followed, including Bull Terriers and Boxer, and in the 1970s, the popularity of a live “mascot” lost its lustre. In 2000, the University Relations department convinced Butler officials to adopt an English bulldog to serve as the official mascot, as chronicled by Anthony Schoettle in the Indianapolis Business Journal.