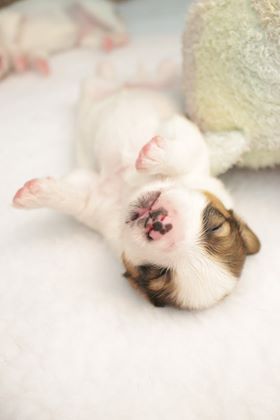 While the puppy in this picture isn’t a toy (as in a Mattel toy), it is a toy breed, and an old one at that. We know from paintings by Titian that the Papillon was already “on the scene” in Europe in the 16th century, but the breed was in America by the end of the 19th century because author, Edith Wharton, had one. A more official appearance probably didn’t occur until 1908 when a Mrs. Storr Wells returned home from Paris with two Paps in tow, and gifted them to Mrs. de Forest Danielson. A couple of years later, Mrs. Wells returned from Paris with two more Paps, both females, and one of these “honeymooned” with Mrs. Wells’ male, “Gigi.”  Their union produced “JouJou,” the first Papillon to be registered with the AKC in 1915, and the first American bred champion.

Mrs. Danielson, recipient of those two Paps, became an enthusiastic fancier of the breed, and began to import more from France in 1911. After World War I ended, she imported more Papillons from England where the breed was experiencing a surge in popularity in the 1920’s. 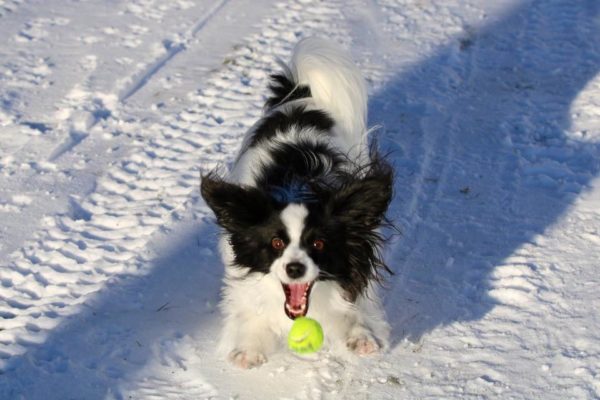 Photo of her Papillon by Vicki Sowa

Other Americans began to import Papillons from Europe during this period, and bred their own, as well.  This included Mrs. W.H. Reagle who spearheaded efforts to get the Papillon more recognition. She was likely among a small number of Papillon fanciers who met in New Jersey in 1930 to form the Papillon Club of America.

In 2015,  the AKC welcomed the Papillon (along with the Flat-Coated Retriever)  as the newest members of the AKC Century Club – breeds with 100 years in the AKC Stud Book. That same year, the Papillon Club of America celebrated 80 years as an AKC parent club.

Image: One of the Papillon puppies from the very first litter bred by Blair Hooser and her mum