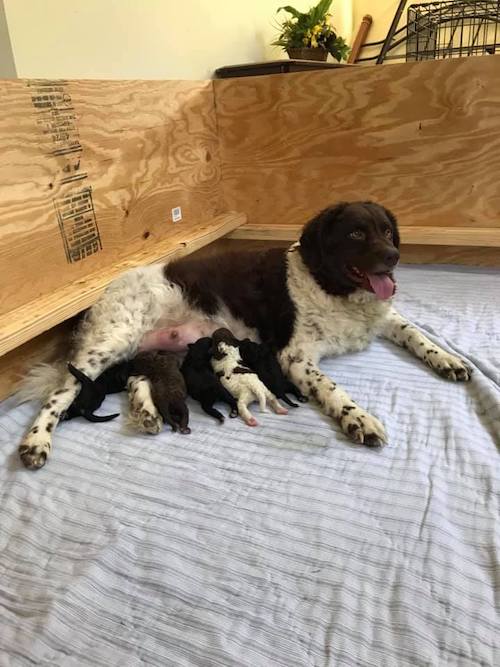 We take great pleasure in sharing news of the recent arrival of five Wetterhoun babies. They are the first litter of Wetterhoun puppies born in the United States, and the five girls and proud mama are doing well.

The little ladies will grow up to be like their mom because that’s what purebred dogs offer: Predictability. They will be gentle and devoted, loving and tolerant, and while pertinacious in what they view as their duties, they will typically do those things in their own good time. They will get muddy while digging holes and splashing around in water, but sometimes they’ll splash in water and then dig holes. They will be strong and powerful, and adorably uncouth. In that regard, they are not unlike Otterhounds.

Coincidentally, the breed is sometimes known as the Otterhûn (though they are unrelated) because hunting otters was a job the breed performed for centuries in the northern region of the Netherlands known as Friesland. While the otter’s pelt was valuable, it was also a source of game which was eaten in some areas. Indeed, in the fabulous book, Amazing Dutch Dog Breeds, the authors Janny Offereins and Diana Striegel share a passage from a 16th century cookbook: “The otter may be eaten on days on which only fish is permitted. It is used in delicate dishes of the rich and wealthy.” This reference alludes to the Catholicism of people living in the south of the Netherlands whose faith prohibited them from eating meat on a Friday, but since otters lived in water like fish, they were an acceptable source of protein on Fridays.  Peasants of the Friesland province also used the dogs to hunt muskrat, polecats, mink, stoat, and other critters regarded as pests, and these animals called for a dog who was fearless and steadfast.

This all ended in 1953 when the Dutch government imposed a national ban on otter hunting to protect the species. The breed’s versatility, however, has enabled it to do other tasks, such as pull carts, provide guarding and protection, goose hunting, and, of course, be beloved companions.

So welcome to the world, little Frisian Water Dogs, we’ve been waiting for you!