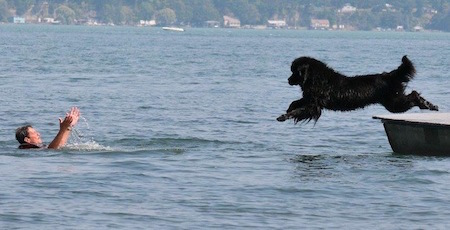 “Specialties,” are basically dog shows for one breed sponsored by the national “parent” club or local “regional” specialty clubs. Sometimes they’re held in conjunction with an all-breed event, and sometimes they are “independents.” There are some 2,000 independent national and regional specialty AKC point shows held every year, and they’re special not only because it’s a treat to see so many dogs of one breed gathered in one place, but because many of them include breed specific events that allow us to see the unique traits of the breed. Herding breeds will often hold instinct or herding trials, sighthound specialties can include lure coursing events, and so on. In the case of the Newfoundland, water trials are held that show the lifesaving instincts of the Newfoundland.

In 1973, the Newfoundland Club of America sanctioned its first official water rescue test in Michigan. Over time, several divisions have been added, but recently, a new division was added that tests the working ability and instincts beyond most Newfoundlands, and not all dogs who’ve earned other water rescue titles can achieve this level of expertise.  Read below how challenging the six exercises for the Water Rescue Dog Excellent title are:

2) In the “Multiple Person Rescue,” a Newfoundland is asked to save multiple “victims” (stewards whom have swum to designed locations, then act as if they’re in distress) by jumping from a boat and swimming close enough so that each “victim” can take hold of the dog and be returned to the handler at the boat. After each delivery, the dog is sent for the next victim;

3) In the third exercise, the dog is sent to “Rescue an Unconscious Victim:” a steward that has swum about 75′ from shore. The is required to take either the victims’s arms or hands, or his lifejacket into his mouth using a gentle hold, and towing the victim to shallow waters where a handler can enter the water to assist. When the handler has a hand on the victim, the exercise is completed;

4)  In the “Rescue of Victim with Capsized Boat,” the dog is instructed to rescue the “victim” of a raft that has capsized by swimming under the raft and allowing the “victim” to take hold of the him or her. The dog then tows the “victim” to water shallow enough for the dog to wade. When a handler touches hands with the victim, the exercise is complete;

5)  A handler takes the Newfoundland on a boat. While on the boat, the dog is instructed to take hold of a line, jump from the boat, and deliver the line to a steward waiting on the shoreline. This test is the “Delivery of Line from Stranded Boat;”

6)  In the final exercise,  the Newfoundland is required to enter the water and swim to a boat from which two “victims” are handing on and acting distressed as if the boat has overturned.  The dog is supposed to swim close enough to one of the “victims” for that person to reach out and to take hold of the dog while still holding onto to boat. The dog can tow one or both victims at the same time to shore. When the handler has taken hold of the hands of the second victim, the exercise is finished. This is the “Rescue of Multiple Victims,” test.

Successful completion of all six exercises earns a Newfoundland the title of WRDX.  We can now see why few ships in the 18th and 19th centuries set sail without a Newf on board, the dogs being kept in the “dog walk” on early sailing ships. Personally, we’re inclined to make sure there’s a Newfoundland around the next time we go anywhere near water. Just saying.