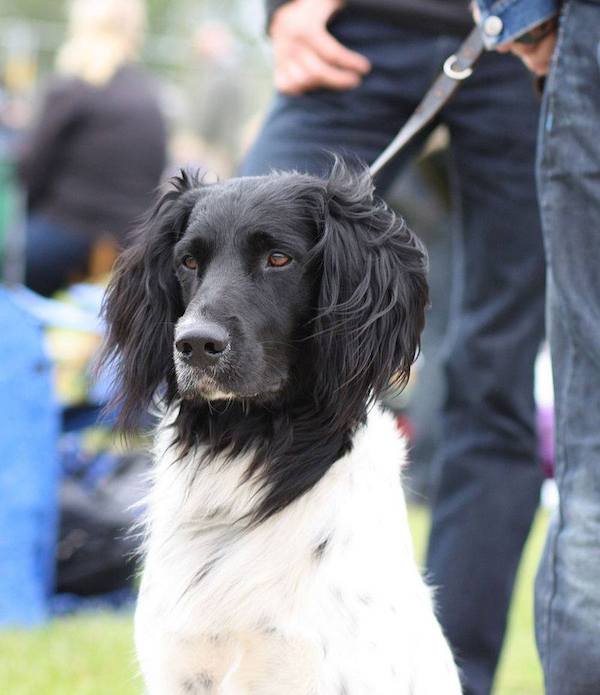 This stunning dog is a Grosser Münsterländer Vorstehhund, or Large Münsterländer, a breed of gun dog originally from the Münster region in Germany. It’s a venerable old breed dating dates back to the Middle Ages, its earliest ancestor a white/particolor bird and hawking dog (as well as some Stöberhund, Wachtelhund, and the Pointer of the 19th century).  This was originally a black-and-white color variation of the German Longhaired Pointer, but in 1919, the LM was officially recognized as a separate breed when the German Longhaired Pointer club decided not to recognize the black color variation any longer.

These dogs are cheerful, intelligent, brave and obedient – and this dog can hunt. The breed excel as bird finders before and after 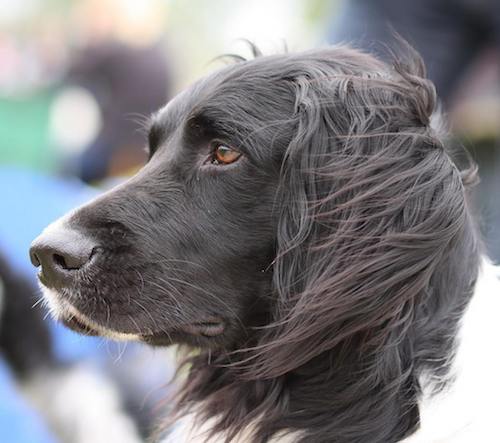 the shot due to their excellent noses, and a purposeful searching style emphasizing thoughtful coverage rather than speed. Its long hair has good points: It helps protect a dog from the briars and brambles in the woods,  and certainly works to keep the dog warmer when fetching waterfowl out of freezing cold water (they are strong in the water!) There are, however, liabilities. Namely, the same coat that protects the dog from briars and brambles in the woods will often bring home those briars and brambles. Some might even call the breed a ‘bur magnet’ for the sand burs, cockle burs and nasty weeds stuck to the coat. Owners think it’s well worth the time to pick them out.

Large Münsterländers have been tested by the North American Versatile Hunting Association (NAVHDA) since the 1970s, but kudos to careful breeders of the last decade for the breed has had more passing scores in Natural Ability and Utility in recent years.  Several dogs, in fact, have earned a Versatile Champion title. Many field trainers admire the breed for its innate talent, and ease with which the dogs are developed on pointing, tracking and retrieving. Owners praise the breed as a gun dog bred that is also a calm house dog.

The parent club in the United States reports that thus far, over 80 dogs have been imported from Europe and over 2,000 puppies have been registered in North America.

Images: Both are from Wikimedia Commons

2 thoughts on “No Longer a German Longhaired Pointer”