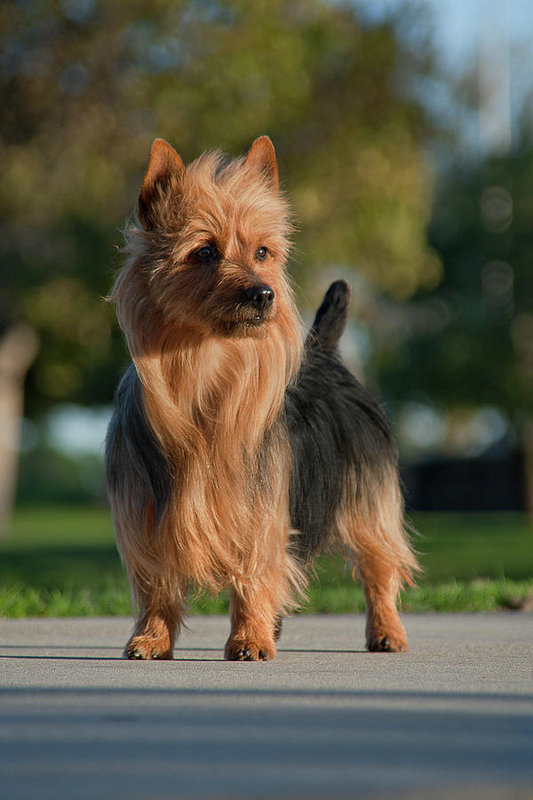 What the Mulga Snake, Eastern brown, Western brown, Mainland Tiger, Inland Taipan, Coastal Taipan, Lowlands Copperhead, Small-eyed snake, Common Death Adder, and Red-bellied black snake have in common is that they are Australia’s ten most dangerous snakes. Of the country’s 170 land snake species, 100 are venomous, and the three most venomous snakes in the entire world are found here.  This is not a country for sissies, and certain not for a “sissy dog.”

The first breed developed in Australia was the Australian Terrier, and while it was created to do many jobs, it’s top priority was to kill vermin and snakes – and not get bit in the process. Only the gamest and fittest of these dogs survived leading observers to say that breeders bred the toughness of the land back into Australian Terriers.

Some have noted that a dog’s technique for killing snakes seems to be hereditary, and with the Aussie, the instinct is to repeatedly and violently shake a snake. The throttling disrupts the snake’s nervous system by damaging the delicate spine which effectively prevents the snake from striking in the dog’s direction. The greatest danger to the dog comes when s/he’s first trying to grab the snake, and the smart dog picks their moment.

Back in the day, some in Australia may not have appreciated their native breed as much as we appreciate it today. In W. Beilby’s, ‘The Dog in Australasia,” the author referenced a heated exchange he had in 1889 in the columns of The Australasian and The Leader. He wrote,”.. the rough (coated) terrier is an unmitigated mongrel and only fit to use where snakes were too numerous to risk a dog of any value…. we must be thankful that the Victorian Poultry and Dog Society (VP&DS) has not allowed the name Australian to be prostituted to such vile uses and hung around the neck of a wretched mongrel.”

Devotees of the then-called Australian Rough Coated Terrier rebutted the comment, and in the end, had the last laugh when in 1909, the Victorian Poultry and Dog Society approved the breed’s new name, ‘Australian Terrier.’ Time also revealed how wrong W. Beilby was.

One thought on “No Place for a Sissy Dog”