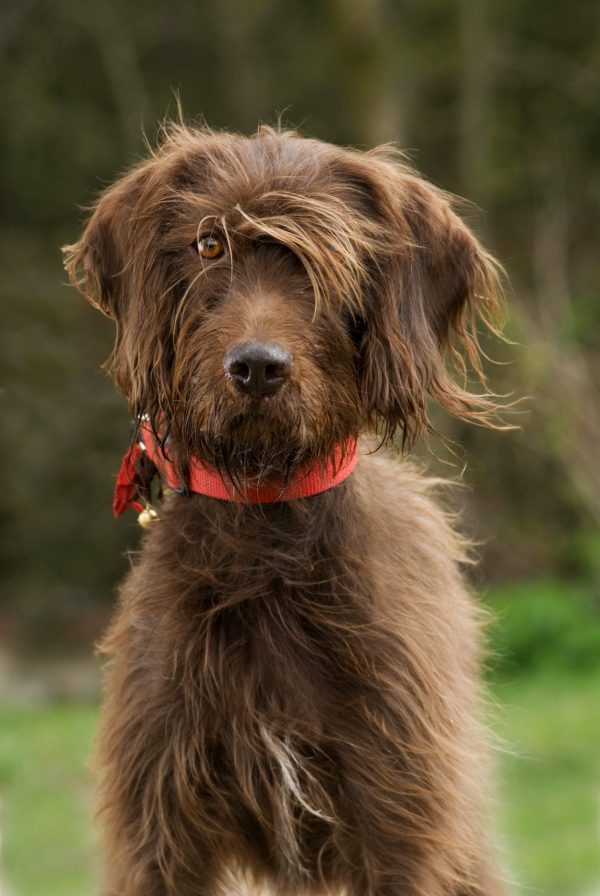 As Puli owners, we are well acquainted with the perception that we have a mixed breed: “Poodle and, um, Collie?” we’ve been asked.  We are hardly alone. Barbet owners suffer through misidentification, as well. “Doodle?” they’re asked. The list goes on, but perhaps the rarest of the breeds thought to be “mixed” is the Pudelpointer.

Yes, this is a combination of Pudel and Pointer, but this is an old breed (the first litter of Pudelpointers was born in 1881). German hunters began crossing Pointers and Pudels nearly 150 years ago, and it should be mentioned that a few experts maintain that the Pudel the Germans used in the 1880s was not the same thing as the Poodle we know today, but a hunting Poodle (Ed note: Today’s Poodle can hunt!).  Other sources, including the AKC, refer to the Pudel as the German name for the Poodle (Pudel actually means “water” or “puddle” and underscores the Pudel’s propensity for water).

The breed is 85% English pointer and 15% Pudel, but the Pudel’s genetics were so strong that only eleven Pudels were used with over 80 pointers during a 30-year period. From then on, only occasional reintroduction of Pointer genes were considered necessary.

That said, the notion of crossing two established breeds to create a new breed was quite a novel concept at the time. While we know that genetic doesn’t always work the way those German hunters had hoped (which was to combine the best qualities of both breeds), their systematic breeding program did result in a superb gundog. A gift for hunting waterfowl is manifest in this breed. Generally considered to be among the best retrievers, the Pudelpointer combines the intense pointing instincts and prey drive of its Pointer forefather with the retrieving prowess of the ancient German pudel famous for fetching and retrieving in cold water. Many hunters who have shot over the breed believe they are the ideal dogs for hunting ducks and geese, particularly in the winter. They are very tough and able to withstand extremely cold temperatures on uplands.

Versatility, however, may be the Pudelpointer’s “calling card.” In Europe, the breed is used to hunt hare, upland birds, ducks and geese, wild boar and stag, and in the US, they are used to hunt quail, chukar, grouse, and pheasant as well as ducks and geese. They have also been used in blood trailing, to locate rare endangered tortoise egg sites, shed hunting, and have been seen in dock diving competitions.  As a companion dog, the Pudelpointer has the Poodle’s wicked smarts and sense of humor, but the Pointer’s sense of fun and competitive spirit.  If the breed has one drawback, its the relatively small number of established kennels in the U.S.

As the time of this writing. we found no national club listed on the AKC’s website, but the North American Pudelpointer Alliance seems to be at the forefront of supporting and promoting this versatile gundog by encouraging high breeding standards and using the NAVHDA Testing System. It is the largest cooperative effort among Pudelpointer breeders in North America and would be the place to start for anyone seeking a puppy. Take note, however, that the sites and sources we checked strongly hint that Pudelpointers tend to be sold only to hunters. Another source to consult is the North American Pudelpointer Society which seeks to “shape the future of the Pudelpointer.”

The Pudelpointer was added to the AKC’s FSS program in 2016.

2 thoughts on “Not a Poodle • Not a Pointer”