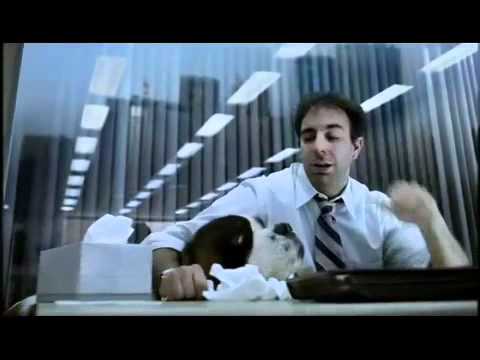 Clever was the person who thought to hang a cold relief medicine from the neck of a Saint Bernard. After all, 122 years after the last person was saved in the Alps by a Saint Bernard (a 12-year-old boy found nearly frozen in a crevice and wakened by the dog),
we still equate the breed with being rescued, though not with a flask of brandy.

It wasn’t the first time. Back in 1982, Neo Critan recruited a Saint for a TV ad:

Interestingly enough it was actually servants called marroniers who at the turn of the century were assigned to accompany travelers between the hospice of Saint Bernard and Bourg-Saint-Pierre, a municipality on the Swiss side. By 1750, marroniers were routinely accompanied by the dogs, whose broad chests helped to clear paths for travelers. The rest, as they say, is history.

We weren’t able to learn much about the dog actors in the commercials, but there was a Neo Citran promotional plush toy that you can still find occasionally on the Internet, like this one.