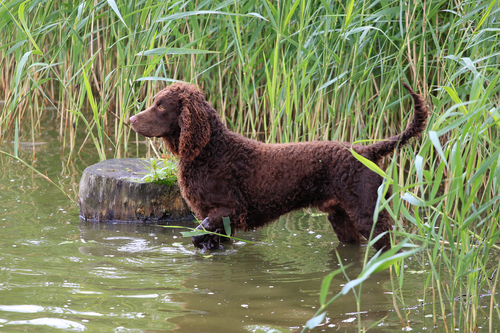 It’s a sporting breed that is not really a flushing spaniel, but neither is it a retriever. It doesn’t work a field with the alacrity or showiness of a breed like the English Springer, but its working style can’t be compared to a Sussex or Clumber, either.  The breed is such a “niche” worker that over thirty years ago, the parent club crafted its own working certificate tests designed to test and demonstrate the breed’s dual working personality as both a flushing and retrieving dog.

This was the corner in which American Water Spaniel folk found themselves in when it came to field testing their dog. No “one” test sufficiently fit their breed, equal parts of retriever and spaniel in the field, a methodical hunter moving at a deliberate pace from side to side in a sweeping fashion. Though the AWS was recognized in 1940, it wasn’t “classified” until 2005 when the parent club voted to categorize the breed as a flushing spaniel, but only after decades of agonizing debates and conflicts.  Why the fuss?

Because some retrievers flush, and some point. Many pointers also retrieve, as do many flushing spaniels. The American Water Spaniel was all of this. A well trained AWS can hunt upland with spaniel-style, but it can also work like a retriever in waterfowling. This versatility was (and is) awesome for the hunter, but was a headache when trying to pigeon-hole a breed for classification purposes. If our homework is accurate, sentiments regarding how to classify the breed were split three ways. Some insisted on a retriever classification, others favored spaniel classification, and a third set opposed either classification not only because it was too limiting for their breed, but because they feared a decision one way or the other would influence future breeders to the detriment of the breed’s dual capabilities. Classify the dog as a retriever, and breeders of the future might unwittingly increase the dog’s size while decreasing its animated movement in the field. Put in a flushing spaniel category, and over time, the breed might end up with lighter bones, less muscle, and an entirely different coat.  According to one source, heated debate raged for years, and sentiments ran so high at times that any discussion of of the topic had to stop, and at one time, stopped for an entire two years.

As difficult as it had to be for all involved, to us it simply was indicative of the love that breed owners had for their breed, and the responsibility they felt for its future.

In the end, the compromised reached involved AKC classification as a spaniel, provided that AKC would modify their spaniel hunting test rules to accommodate the AWS’s dual talents. In addition to qualifying in the required number of AKC spaniel hunting tests, a dog also had to pass a “Retrieving Certification Test,” a rule change that would apply only to the AWS, but not to other spaniel breeds. The breed could earn AKC hunting test titles as a spaniel, and in 2011, the AKC also allowed the AWS to earn retriever titles.

This makes the American Water Spaniel one of a handful of breeds allowed to earn both retriever and spaniel AKC titles.