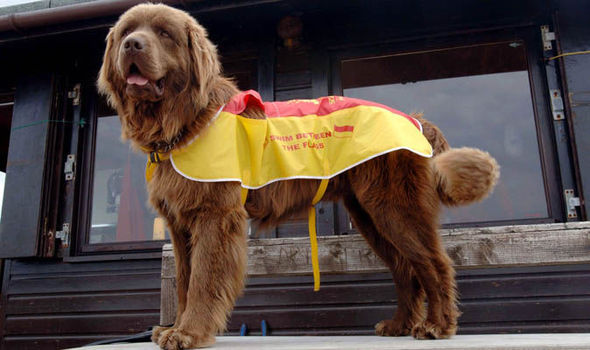 Having stated the obvious (by people who believe that every breed is unique and special),  we feel confident in stating again that Newfs are unlike other dogs especially when it comes to their prowess in water. Massive webbed paws act like paddles and endow a Newfoundland with maximum propulsion. Unlike the majority of other dogs, the limbs of the Newfoundland move in a down-and-out motion which is closer in appearance to a modified breaststroke. This unique style of propulsion gives the dog more thrust and power with every stroke, and they can swim this way for long distances in cold temperatures. The founder of Newfound Friends, David Pugh, calls it a “four-wheel drive” swimming stroke style. Newfound Friends volunteer and trainer, Ellie Bedford, has a simple explanation:  “These dogs are just supernatural and from another planet.”

To help illustrate, we share a video of Bilbo, a 196 pound Newfoundland who served as the canine lifeguard counterpart to his owner, Steve Jamieson, and together they patrolled the beach at Sennen Cove in Cornwall, UK: Be sure to watch the underwater shots!

A little more about Bilbo: In light of his talents, it seemed ludicrous when the Royal National Lifeboat Institution that took over the running of the beach from the local council in 2008 decided that Bilbo’s services were no longer required. Admittedly, Bilbo was privately owned which seemed to have been an issue at the time, but Bilbo, a regular fixture on the beach often seen wearing his lifeguard’s vest carrying safety messages on it, was credited with saving three lives, and indirectly saving scores more from getting into dangerous trouble in the water, like the time he made headlines for trying to stop a swimmer from entering the water by blocking her path. When she went in anyway, he swam in front of her to protect her from dangerous currents.

The public wasn’t having it. People were enraged, and after a year, 10,000 petition signatures, over 2000 signature on the website, and a Facebook of 7,000 strong rallied to get Bilbo back on the beach. Caving to pressure (and common sense),  Bilbo was officially reinstated after proving that he could pass the same fitness and swimming tests given to human lifeguards. And thus, Bilbo became the UK’s only lifeguard canine.

All told, Steve and Bilbo, served for 11 years, and for five of those years, together, Bilbo worked alongside Steve as the UK’s only trained lifeguard dog.  Sadly, Bilbo passed away in 2015, an ‘“old man” at the age of 12. Not surprisingly the news was reported around the globe.

You can read more about Steve and Bilbo in Steve’s book, The True Story Of Bilbo The Surf Lifeguard Dog

*Mitch Buchannon was a character played by David Hasselhoff in the TV series, Baywatch

One thought on “The Canine Mitch Buchannon*”