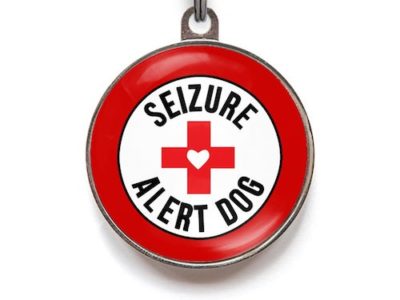 This is a post that comes under the category of “a picture says a thousand words.” 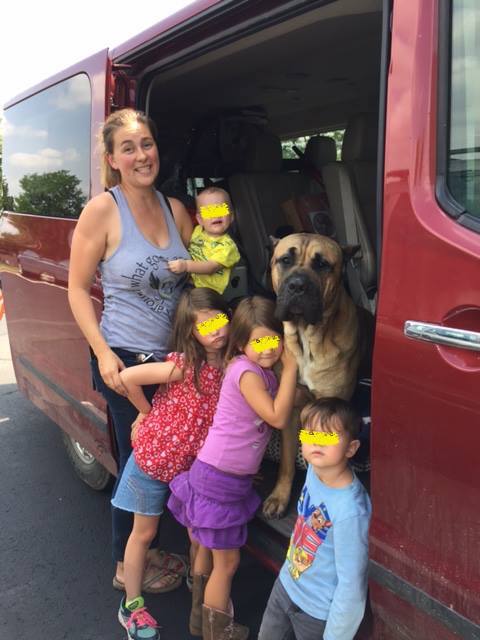 It was hard not to notice a red van rocking from side to side in a parking lot of a grocery store, but we reasoned that the van was full of kids horsing around. That theory evaporated when we saw a mom and her passel of kids approaching the vehicle. If the kids were with her, who was rocking the vehicle?

And that’s when we first saw “Heimdall.” As we loaded our own groceries, we surreptitiously watched “mom” slide open the back door and out popped the head of this magnificent Cane Corso. Suddenly, we understood. Because it’s not every day that we see a Cane Corso outside a dog show, we strolled over to ask if we could meet him.

Heimdall is the gentle guardian of his flock, but he is especially important to the tyke being held in his mom’s arms. The little boy has seizures, but no one had any idea that Heimdall had a gift for alerting to an attack until he did it several times. Now he’s the child’s seizure alert dog, and Heimdall’s name is all the more fitting: It is Nordic for “gatekeeper.”

Seizure alert dogs can warn people with epilepsy of an oncoming attack minutes—sometimes hours—before one occurs. The difference this can make in a person’s life is immense because it allows a person – or their parent – the chance to get medication in time, to get to a safe place (and not, say, in the driver’s seat of a car),  or the chance to call for help. How dogs do this remains a bit of a mystery. Some researchers think that dogs can detect subtle changes in human behavior or even by scent before a seizure happens. Some organizations believe that dogs can be trained to pick up a signal, but others think they have to be born with the skill,  the ability to detect a seizure signal utterly untrainable. Trainers also believe the behavior is not breed, age or gender specific in dogs, and Heimdall is evidence of this.  Heimdall not only gives his family peace of mind, but also saved them some money. Preparing a seizure alert dog costs $26,000 to train, feed, and house until they’re ready for prime time.

We’re grateful that this very busy lady let us snap a quick picture of her brood with “Heimdall” making sure all was correct and proper. We blocked part of the little ones’ faces anyway because the Internet can be a creepy, scary place, and “Heimdall” can’t be everywhere.

The seizure alert tag seen at the top can be purchased here,  and we think having one hang off the collar of a seizure alert dog is important not only for the person needing the dog, but for the safety of the dog. No dog should ever be stolen, but some thieves may be less inclined to snatch a dog who has a medical duty.

One thought on “Not Breed, Not Age, and Not Gender Specific”