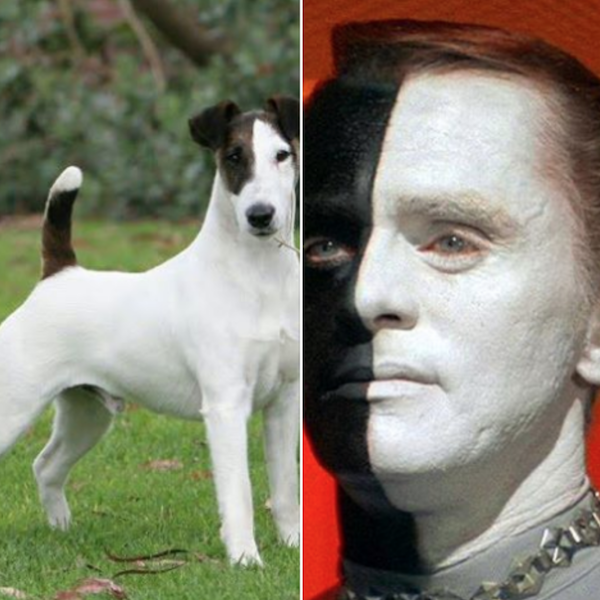 Dogs with “split faces” seem to get along with each other better than Bele and Lokai did from the planet Ariannus in the classic TV series, Star Trek, but “split face” is the term used for when half of a dog’s face is one color, and the other half is some other color, usually white.

To our knowledge, the mode of inheritance for this remains largely unknown. It may simply be part of fetal development instead of a pattern controlled by genetic inheritance, but in some breeds, it may be a separate gene or modifier that causes some dogs with the Irish spotting, piebald or trim pattern to have a split or completely white face, even if there’s very little other white on the dog. In merles, a split face is believed to be a variation of pigment distribution, and it’s sometimes seen in solids with blazes. No known breeding tests have been performed to date to determine the heritability or lack of heritability of this trait.

Split faces are not uncommon in Border Collies, Australian Shepherds, Panda Shepherds, and, of course, the Smooth Fox Terrier.

As an aside, we always thought that, “Let That Be Your Last Battlefield” was one of Star Trek’s best episodes. As a recap, the Enterprise encountered two survivors of a war-torn planet, each was half black and half white, but on opposite sides of the other, and for that reason, they were committed to destroying each other. Silly, eh? Happily, split faced dogs seem not to notice the difference.

If you have a dog at home with a split face, let’s see their picture!