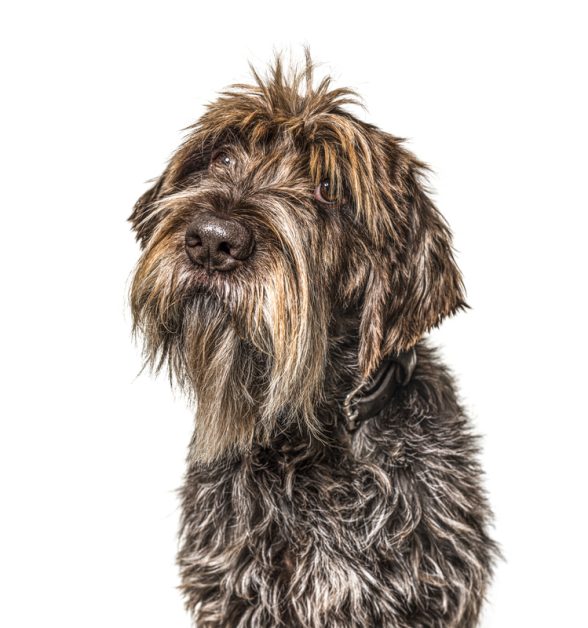 Nor are they all gundogs (i.e., the Brussels Griffon). Regardless of their recognized registry name or size, what they do all have in common is a wire, harsh, or rough coat.

One might wonder about how the word, griffon, came to be used to describe a dog breed since most sources define griffon/griffin as a mythological creature with a lion’s body and the head of a bird, usually an eagle. Surviving the centuries, the griffin is a common motif in sculpture and architecture.

Some cynologists suspect that certain breeds were called griffons (spelled with an ‘o’)  because their wiry coats gave them beards that looked like an eagle, and therefore, made them look like a Griffin. We don’t see it, ourselves. Other sources point to the french word, ‘greffier,” which means clerk, and that morphed into griffon, or clerk’s dog, but there is scant information (as in none that we’ve found) on what one has to do with the other.

Other experts point to the Chien-gris, an extinct dog breed bred by Gaulish tribes who ruled what is today modern day France and Belgium. These dogs (originally called Canis Segusius)  were known for their hunting instincts and wiry coat, the harsh coat preferred for its extra layer of protection against the elements of the swampy regions in which the dogs lived, as well protecting their skin from animal attacks while hunting. Some have theorized that the Canis Segusius was the original breed from which all griffon breeds descended, and that “griffon” was a bastardization of the latter part of the name, “Chien-gris.”

Perhaps we’ll never know definitively, but that varieties of griffon breeds are found from Italy in the west to Hungary in the east, and in between is indisputable. Nor is the antiquity of the type debated, though there may be robust discussion about the Spinone Italiano being the oldest form of a griffon which many say it is. According to writer, David Hancock, the Spinone type was known throughout the Piedmont, Istria, Dalmatia, Venetia, and as far as the Danube.

We conclude with another observation by Hancock, and that is that French hound breeds with griffon in their name have a reputation for being “excessivement meurtier.” He writes that while “not being ‘murderous,’ pointing griffon breeds display much more ‘edge,'” than many other breeds.

Our takeaway is the griffons have the heart of a lion, the brains of an eagle, and if one misbehaves in the field, he is not being murderous, he’s being “edgy.”

Image: Headshot of a Korthals Griffon by ©Isselee | Dreamstime