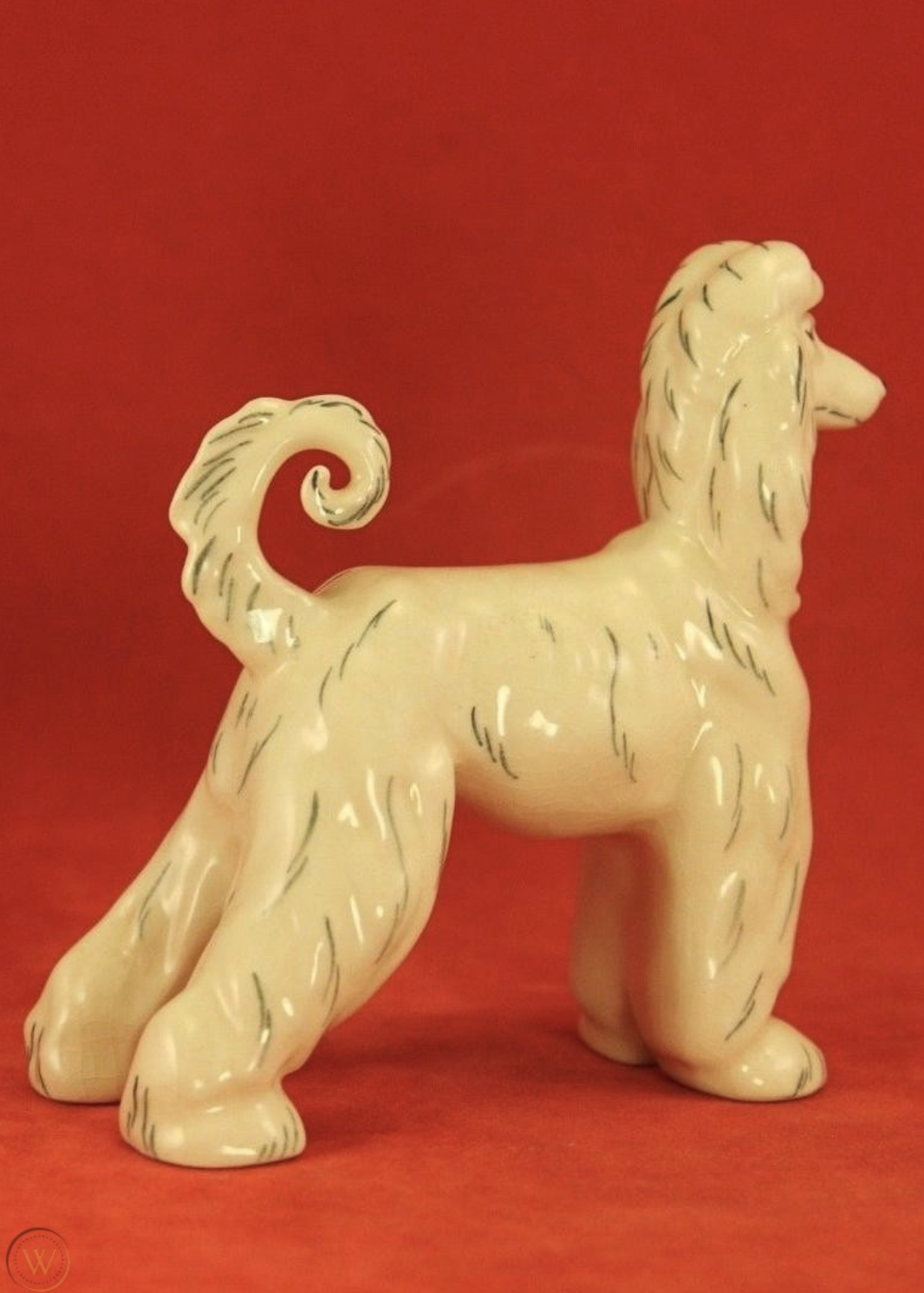 Kay Finch passed away in 1994, but her talent lives on in the small sculptures she created in the 40’s and mid 1950s. Hand-painted Kay Finch pottery were among the most popular of mid-20th-century California collectibles, and while she created everything from praying angels, Victorian people, and birds, it is her imaginatively stylized dogs that gets our attention in this post.

The Orange County resident started her ceramics business as a hobby, but when it kept growing, Kay and her husband, Braden (a reporter for the Ventura Star), built a studio and retail showroom on five adjoining lots on the Pacific Coast Highway in 1941. Eventually, the company would have more than 65 employees (most of whom were the wives of servicemen) who fired, glazed, slip-decorated and hand-painted figurines from the molds that Kay made based on her sculptures. Kay’s studio was considered to be the first modern ceramic studio on the West Coast.

There was no shortage of competition in the collectables market at the time – knick knacks were popular in the 40s and 50s. Cheap imports from Japan and Italy soon made it hard for California potters to compete, but Kay’s pieces were an appealing contrast to these darker, heavier imports. Mostly pastel colored,  they were delicately designed, and much lighter in weight because of the material Kay used, a composition of Kentucky and Tennessee clay mixed with California talc, a mineral mined in abundance in the California desert.

In its prime, Kay’s “Made in California” stamp was prized. Her porcelains were sold in 19 countries and at fine department stores like Marshall Fields, Neiman Marcus, and Saks Fifth Avenue. The items included dog-head ashtrays, dog-handle steins, plaques, cigarette jars, and stand-alone statuettes. Kay’s love of dogs was apparent in the expressiveness of these pieces, but a fondness for canines didn’t fully account for their popularity. Kay had an eye. It was a practiced eye born from experience.

Kay was an AKC hound and toy judge, and a top Afghan Hound breeder who produced well over 100 Afghan Hound champions under the Crown Crest name,  as well Saluki and Yorkshire Terrier champions.  Her Afghan Hound, “Johnny,” aka Ch. Taejon of Crown Crest,  sired twelve champions,  and he, himself, won the Hound Group at Westminster Kennel Club in both 1954 and 1955.  Kay said at the time, “It’s funny at shows, but when Johnny comes in, the other dogs just wilt.” Johnny even appeared on the March 12, 1956 cover of Sports Illustrated.

Finch would go on to have another top winning Afghan Hound, Am/Can. Ch. Crown Crest Mr. Universe who earned 35 all-breed Bests in Show, a record at the time, as well as four national-specialty wins and 100 Hound Group Ones.

Kay was not born into the fancy. She was twenty-six years old before she saw her first Afghan Hound at a California hotel. Thinking at first that it was a longhaired goat, Kay was smitten.  The rest, as they say, is breed history.

When Kay’s husband, Braden, died in 1962,  Kay closed her studio and showroom and sold some of the molds to Freeman-McFarlin Potteris in El, Monte, CA She continued to do free-lance design work for the company on the side, and indeed, continued to work until she was seventy-six years old.

Kay Finch died in 1993 at the age 89 and left behind her mark on both the dog and art world. Her early pieces are now sought by collectors, and a porcelain in mint condition can fetch a high price. Pieces similar to the image seen here have sold in excess of $600

To read more about Kay Finch and her Afghan Hounds, read this Canine Chronicle article by Lee Canalizo from 2011, and Denise Flaim’s AKC piece from 2019.