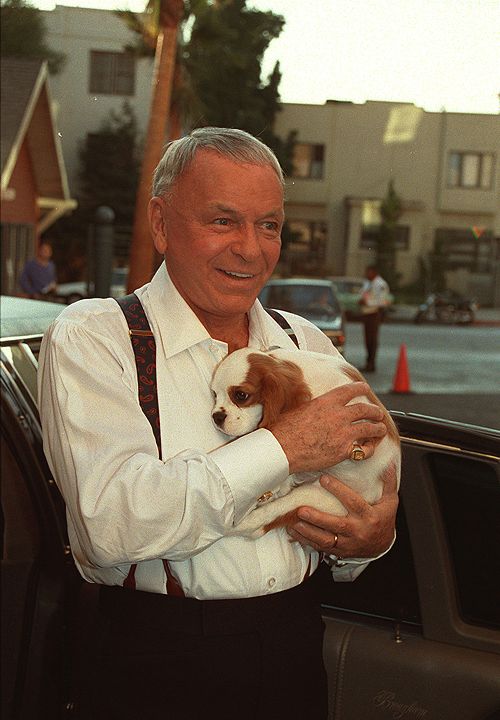 We suspect that among our page friends, many of us weren’t allowed to have a dog when we were kids. It happens to the best of us. Frank Sinatra’s mom didn’t allow him to have a dog as a kid, either, but he made up for it later by having many dogs – and a soft heart. His widow,Barbara, remembered when she found a snake in the yard and called the gardener to dispatch it. Barbara recalled that, “Frank said, “No, no, he’s a friend of mine,” and threw it over the fence onto the golf course.

Sinatra had a particular soft spot for Cavalier King Charles Spaniels. “He absolutely adored them,” his wife told the Palm Beach Post. “When he was sick in his room, he’d have the cats on one side of the bed, and the dogs on the other. And he would pet them both.” Tina Sinatra recalled that as a little girl, she asked her dad where heaven was. He replied, “Heaven is where all the animals go.” When Sinatra died in 1998, several mementos were placed in his coffin, and one of them was a small dog biscuit for Sinatra’s love of dogs.

As an aside, “youngsters” often wonder what the fuss was about when it came to Sinatra as a singer. In our view, it was his phrasing, or how he sang a song. He infused the lyrics of his song with an intimate point of view (some say it was infused with eroticism). Listen to his rendition of “Strangers in the Night” to see if you agree, but don’t look at the monitor. Look off into the distance and just listen to HOW he sings the song. You may want to listen to “Cake’s” version just to compare.

One thought on “Old Blue Eyes and His Dogs”